View basket “Tomas Hed – Icon 1: The Goat” has been added to your basket. 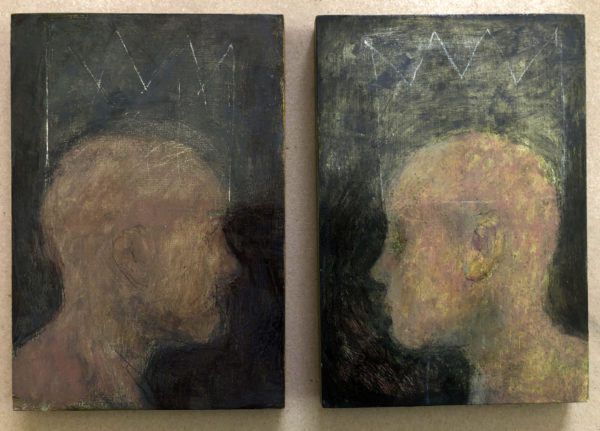 Flowerheads (starting on 2015) is an ongoing series of drawing-paintings on prepared paper or wood, which explores the complex and fragile reality of man, (typified by the male/king) and of the foolhardiness brought about by our becoming conscious of our primacy – our heightened sense of superiority over nature, and to our false notion of nature’s helplessness without us. The series is predominantly motivated by Kant’s definition of the sublime as not residing in any of the things of nature, but only in our mind.

Common within all the works is the image of the crown as symbol of power and supremacy, but also of the burden that comes with such authority. Within the series, the crown is rendered in various forms; many times it is drawn as a flower, in agitation; or as a flowery bloom having spikes, and as a cover for the head (a device for taking over of the male brain).

The title of the series is borrowed from urban slang, where a ‘flowerhead’ is a male who is considered cute by the female sex, but also undateable. This metaphor is haplessly extended through its common aesthetic, that of the heads being always shown decapitated and on plinths. The heads therefore become objects of duality, venerated art-objects placed on public show and also prophetic proof of the fate of martyrdom, an embodiment of the price equally paid for being at the top, or confronting populist opinion or fanatic belief.