TONY BRIFFA. Born in Malta in 1959, he studied ceramics in the late seventies obtaining a distinction diploma from Tarġa Gap School for Craftsmen.

After almost ten years working in the ceramic industry, he was entrusted with the ceramic studios at Tarġa Gap, his old art school.  Since the early eighties, he exhibited in a significant number of national and international juried exhibitions, drawing the attention of art critics and collectors . All along he also worked intensely in the theatre both as an actor and as a designer. He designed sets, costumes & props for major productions by playwrights as diverse as Aristophanes, Moliere, Neil Simon and Peter Shaffer.

In 1995, he was awarded the Commonwealth Foundation Fellowship in Art and Crafts, which he pursued later as a Visiting Scholar at the Centre for the Arts, Hobart, University of Tasmania. While in Australia, he attended the international ceramic Clay Scupt Symposium at Gulgong.

He moved to Tåsinge  in Denmark in 2002 where he now lives and work. Tony was awarded the Pollock-Krasner Foundation Grant in 2015 and the Malta Arts Council Grant in 2016 and 2018 for his ceramic sculptures. 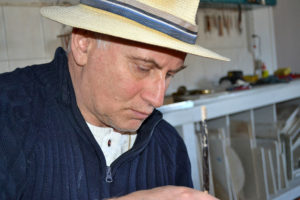