Witness Bonjisi was born in 1975 in Mudzi, Mutoko. He grew up in Domboshava, Chinamhora where he achieved his primary education. He then moved to Mabvuku, on the outskirts of Harare and completed his secondary education. He started sculpting in 1992 with the late Nicholas Mukomberanwa and then with his elder brother Lameck Bonjisi. He has attended workshops in America and Switzerland and his works can be found in galleries and private collections all over the world. 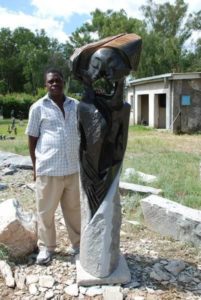