VICTOR AGIUS. Born in 1982, Victor Agius is an artist working in sculpture, painting, video, performance and installation. His practice demonstrates a direct affinity with the earth and the natural elements which are clearly demonstrated in his continuous research about primitive rudiments and rituals and also man’s incessant rapport with nature, time and his own existence. After graduating from the University of Malta (2004), he furthered his studies in Perugia, Italy and at the Central Saint Martin’s College for Art and Design in London (UK). He is co-founder of Ars Vitae Ensemble. He is also a visiting lecturer at the University of Malta. His works have been exhibited at the National Museum of Fine Arts and St James Cavalier Centre for Creativity in Valletta, at the UNESCO World Heritage site Ġgantija temples, at the Mdina Cathedral, at The Royal Theatre in Valletta, at St Agatha’s Catacombs in Rabat, at The Mill – Art, Culture and Crafts Centre and in local and international galleries including St Eufemia Gallery in Venice, at Lauba Gallery in Zagreb, and at the Ceramic Context in Bornholm, Denmark. His works are to be found in numerous private and public collections worldwide, and in international published catalogues and books. 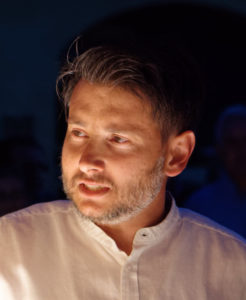