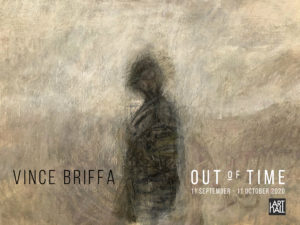 –Title: OUT OF TIME – Exhibition of recent work by Vince Briffa–

The exhibition presents a collection of works on paper and mixed-media paintings selected from the last ten years of the artist’s studio production, including work produced during the Covid-19 lockdown.

The exhibition centres on the artist’s ongoing concern of our relationship with time and what it means for a human being to exist temporally in the stretch that we call our lifetime.

The works exhibited are selected from the following bodies of work:

The Terrain Vague Series (2010-2011): The concern with attempting to locate and
to define the undetermined divide between two opposing forms. In landscape
theory, the concept of terrain vague, wasteland or ambiguous space, refers to the
undescribed territory that separates the city from nature. The artist used this term
as metaphor for our relationship with our surroundings.
Two works entitled “Between Ash and Dust” are shown from this collection. The works
in charcoal and mixed media on wood, speak of implausible distances and detached spaces
splitting up such evasive elements as smoke and sky. They are as much about the process
of drawing/painting as they are about the current war imagery of destruction taken from
tabloids or television. These metaphoric memorials sway unclearly between human
intervention and natural phenomena and embody an act of restitution through the same
material they are made of (charcoal being fire’s residue), a destructive force embalmed
through its very remains.

The Lichtung Series (2019 – today): This ongoing series of works were inspired by
Martin Heidegger’s term Lichtung as the “Clearing”, and makes reference to
Heidegger’s quote: “In the midst of beings as a whole an open place occurs.

There is a clearing, a lighting… Only this clearing grants and guarantees to us humans a
passage to those beings that we ourselves are not, and access to the being that we
ourselves are.”
The artist uses this title to refer to a series of works that relate to the genre of the landscape,
but plays with the philosopher’s definition in German, ‘eine Lichtung ist,’ literally meaning
‘a clearing is,’ suggesting the kind of clearing one finds in the woods or the forest, where
light seeps through the less dense parts of the branches precisely referring to the ‘lightened’
patch of the forest. The artist is, however, more interested in Heidegger’s use of ‘Lichtung’
in the sense of ‘shedding light’ on something, referring to our capacity to give meaning
(in this case to landscape) through our own memory. The works therefore refer to the artist’s
memory as the shedding light that creates these ‘could have been’ landscapes, a tribute to
Simon Schama’s assertion in his book ‘Landscape and Memory’ that “Before it can ever be
a repose for the senses, landscape is a work of the mind. Its scenery is built up as much from
strata of memory as from layers of rock.”

The Mounds, Canifantasma and Nell’Ombra della Torre Series (2018): These
collections of works were created in Umbria, Italy during the artist’s residency at
Civitella Ranieri castle in 2018. The works selected for the exhibition are a direct
reaction to the experience of space and history on the artist.
The ‘Mounds’ collection, are the more abstract and take their inspiration from landscape
forms around the area. These works preceded and also fed the current ‘Lichtung’ series.
The ‘Canifantasma’ and ‘Nell’ Ombra della Torre’ series were inspired by the history and
architecture of the Civitella Castle in Umbria and the Ranieri family who were the original
owners of the castle.

The Swath Series (2020): The series which started during the COVID-19 outbreak
is inspired by rituals of birth and death in historical and contemporary societies.
The title ‘swath’ as the noun and ‘swathe’ as the verb reference the way we envelope
both babies at birth and corpses in bags prior to burial.
The series concerns the aesthetics of the clothing at the two extremes of the human lifespan
(birth and death) and reflects the ‘thrown projection’ into this world (and its consequential
abrupt truncation through death) in Heidegger’s ‘Being and Time’. The works, which show
bodies wrapped in what seems like a cloth or a swathe of bandages, equally make reference
to news images of Covid fatalities and to victims of a road accident or death at sea. These
forms have a striking resemblance to the swathing of newly-born babies throughout history.