Out of Time and out of synch

Untitled 3, from the Lichtung Series

Traditionally, the objective of an art exhibition is for the artist to document the last months or years of his or her creative output or as an epitaph to a series of works that have been created during a finite period of time and which are pertinent to a predetermined, specific theme.

On the other hand, retrospectives reach out to the origins and the first footsteps in the career of an artist. These usually cover a longer period of time and include all the paths pursued by the artist, even the less successful ones.

Through the regressive time frame of retrospectives, the artist is urged to relive his or her past and wrench out specific artworks from relative obscurity or from their concealment in private collections. Thus, they are given prominence as artefacts that are enlightening chapters in the retrospective’s autobiographical narrative.

Vince Briffa with two works from the Between Ash and Dust Series.

However, there are other exhibitions which defy this facile classification by not being tied down by categorisation.

Vince Briffa’s latest exhibition Out of Time “deals with hazy demarcations” that permeate all aspects of the exhibition. The title itself is ambiguous: Briffa intriguingly invites us to decipher its ontological meaning. He says the title of the exhibition can refer to the finite duration of our lifetime: each one of us will eventually run out of time on this earth and die.

“For me, out of time means also out of synch. Our lives are out of synch with the actual concept of time. Synchronicity is severely lacking in today’s world and that causes existential discomfort as we have lost our sense of belonging. Our daily life has become compartmentalised into the 9 to 5 day of machines. Our identity and independence as sentient beings are being menaced by predetermined patterns that obey sets of rules whose routine we dare not transgress,” he says.

“The element of time has always been part of the work that I do. My work borders on the philosophical, is very anthropocentric and concerns the transience of human existence in a lifespan.

“Time can be scientifically gauged, compartmentalised and defined. However, I’m interested in the haziness that exists between these demarcations that segment recorded time into smaller components. There is that foggy space that separates one hour from another. My work also refers to the dualities, that unclear territory that exists between one hour and another, between one image and another, the uncertainty that thrives in these situations.”

Memory of an Island, from the Swath Series

This in-between characteristic is woven into the fabric of the artworks themselves as the representational merges with the abstract.

When asked if his work is representation via abstraction, Briffa hesitates and then says: “I always thought of myself as being a representational artist. But my work changed as I changed. I went into abstraction for a very long time. Now I’m going back to the representational; no that’s not exact. It’s an in-between.

“Within the same body of work, I can swing from the representational to the abstract and the work changes as I go along, so I can’t define this exhibition as being either representational or as being abstract.”

Within the same body of work, I can swing from the representational to the abstract

The artist straddles the border between the genres and blurs the lines at will. He coined the term ‘drawing painting’ to describe the in-between medium of the exhibits.

Briffa’s career can be traced retrospectively to its origins. His technical bravura as a portraitist shines in his very early works which go back to the 1980s. This was followed by an important 1994 exhibition, Voyage, in which he revisited the passage of time via art history. He interpreted Masaccio’s Expulsion from the Garden of Eden and explored the works of 20th-century masters like Paul Klee and Ben Nicholson.

Untitled 1, from the Swath Series­

The chromatic vibrancy pertinent to this exhibition seeped out of Briffa’s palette when he explored the monochromatic melancholy of death, decay and temporal relics. Video-art installations followed in the mid- to late-1990s, dealing thematically with the compartmentalisation of time.

“I never left painting. I was doing video art through a painterly perspective. I can never leave the painting part of me. Instead of using brushes, I used film. I treat the mediums in the same way. The concept determines which medium I use. If photography works better in certain circumstances, then I use photography,” he notes.

There is a loose chronological dimension to Out of Time as the exhibits form part of three separate series that Briffa worked on in the last 10 years. There may have been the intention to broaden the ‘gaps’ and merge the ‘relics’ of the three series into a ‘collage of uncertainty’.

Although the titles of the works determine the series to which each individual work belongs, the exhibition explores this heterogenous territory in the choice of the works. It becomes an underlying concept in itself, evoking the cut-ups of Brion Gysin and William Burroughs and the haphazard rearrangement of elements as a new possibility.

The exhibition also demonstrates a return by Briffa to previous art-historical themes.

L’Immagine Divina della Realtà takes over the romantic theme of two figures in a landscape which has been interpreted numerous times by so many artists. It is about a classical theme − the head of a man looking at the body of a woman. This work transcends art history as the theme is ecological ‒ it is about the dichotomy of life and death. The body decomposes and becomes one with earth or with water; the element depends on the perspective of the viewer.

“I recycle themes, however, there is a thread that goes through all the work. My work is cyclical,” Briffa underlines. 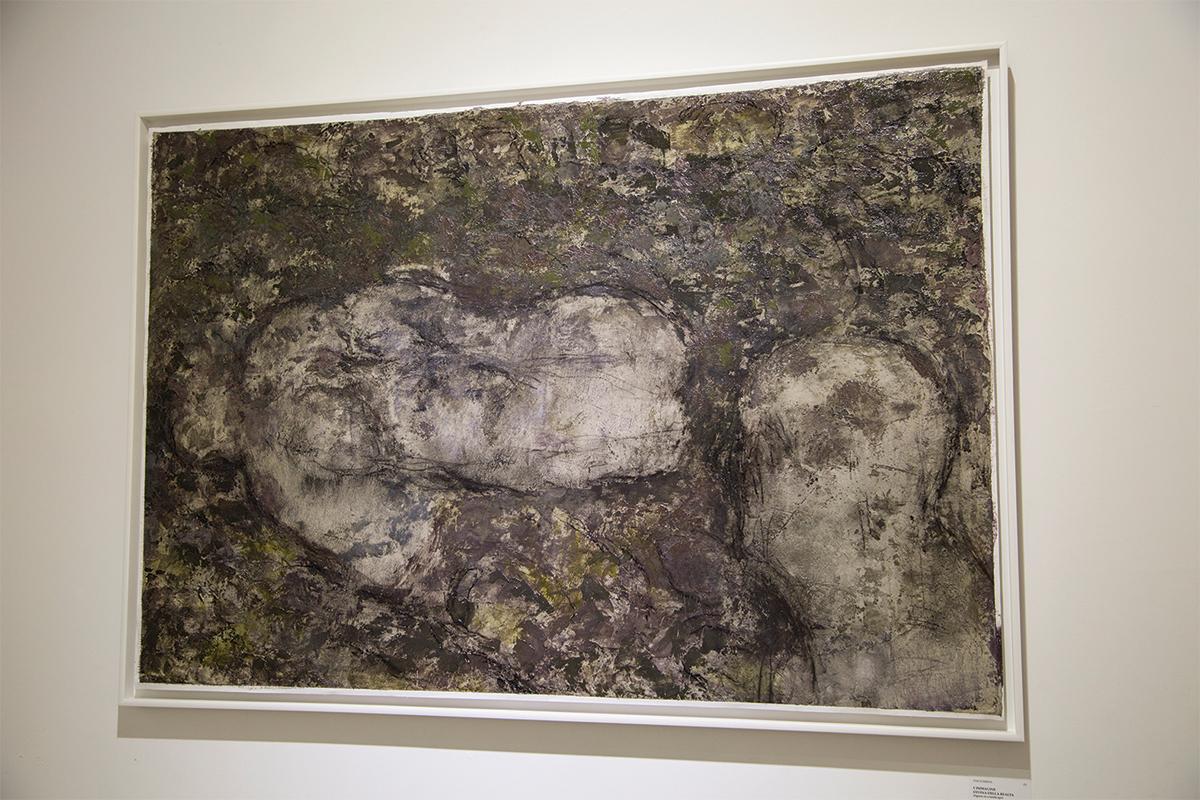 “At the moment, I am working on three series in parallel. Three of the exhibits relate to the series that I had started during the COVID-19 lockdown. I find that there are very interesting parallels to be discovered. I find connections between the aesthetics of the body bags that the media constantly shoved on us for lengths of time, especially during the first two months of lockdown, and the historical neonatal swathing. The story of the drowning of the unfortunate immigrants in search of a better life had its epitaph in the distribution of the body bags in rows.”

There is so much irony in this. This duality of death and life can somehow be ambiguously explained by Martin Heidegger’s words: “Temporality temporalises as a future which makes present in the process of having been.”  This perhaps is the uncertainty that Briffa is after, one in which state, time and identity are merged and lose structure in a fog.

Necropolis, from the Swath Series

The works that belong to the Between Ash and Dust series explore this netherworld of conditions. Ash elicits, through combustion, a transformation of something self-evident into a tenuous structureless form that eventually crumbles into dust. One or more elements of nature creep seldomly into Briffa’s compositions as agents of renewal.

The philosophies of Heidegger act as the backdrop for the Lichtung series of earthy materic landscapes that are reminiscent of Anselm Kiefer. Briffa, like Kiefer, clears the forest and presents a blitzed aftermath that glows with latent energy. This untraditional approach creates landscapes through an immanence of some basic elements, resulting from the reduction of the sylvan components of trees and branches into an empirical state that can be a landscape in itself.

Being head of the digital arts department at the University of Malta allows Briffa to have a reasonable overview of the direction and the creative vision of the young and the not-so-young artists pursuing a Master’s in digital arts. He declares that the internet is a double-edged sword as it can give rise to appropriation and cross-fertilisation of ideas resulting in original work but can also lead to plagiarism.

“The culture is a DJ culture. There are different loops which you couldn’t have come up with by yourself. The artist integrates them to create something which is quite unique,” he says.

One is once again reminded of Heidegger’s words when he prophetically postulated that “everyone is the other and no one is himself”.

It is uncanny how uncertainty seems to govern all aspects and all senses of perceived reality and everything goes in and out of synch all the time.

Untitled, from the Swath Series