Assemblages can be regarded as collages in three dimensions

“Pandemonium, the palace of Satan rises, suddenly built of the deep: the infernal peers there sit in council” – John Milton

John Milton’s Paradise Lost is English artist Key’s springboard for his current exhibition hosted by Arthall in Victoria, Gozo. The etymology of the word pandemonium, coined by the celebrated English poet, is an ‘assemblage’ of two words from Greek – ‘pan’ is translated as ‘all’, and ‘daemonium’ is translated as ‘evil spirit’, originating from ‘daimonion’ (inferior divine power originating from ‘daimon’ (lesser god). Pandemonium is the name of the palace of Satan, situated in the deep pits of hell.

Many centuries later, the term has acquired another meaning, and refers to general disorder that affects all the senses. It defines the time in which we are living, mayhem reigns supreme; turmoil and strife, population displacements, the pandemic and climate change have become important factors that contribute to this general global malaise that have wreaked havoc on a semblance of normal existence. 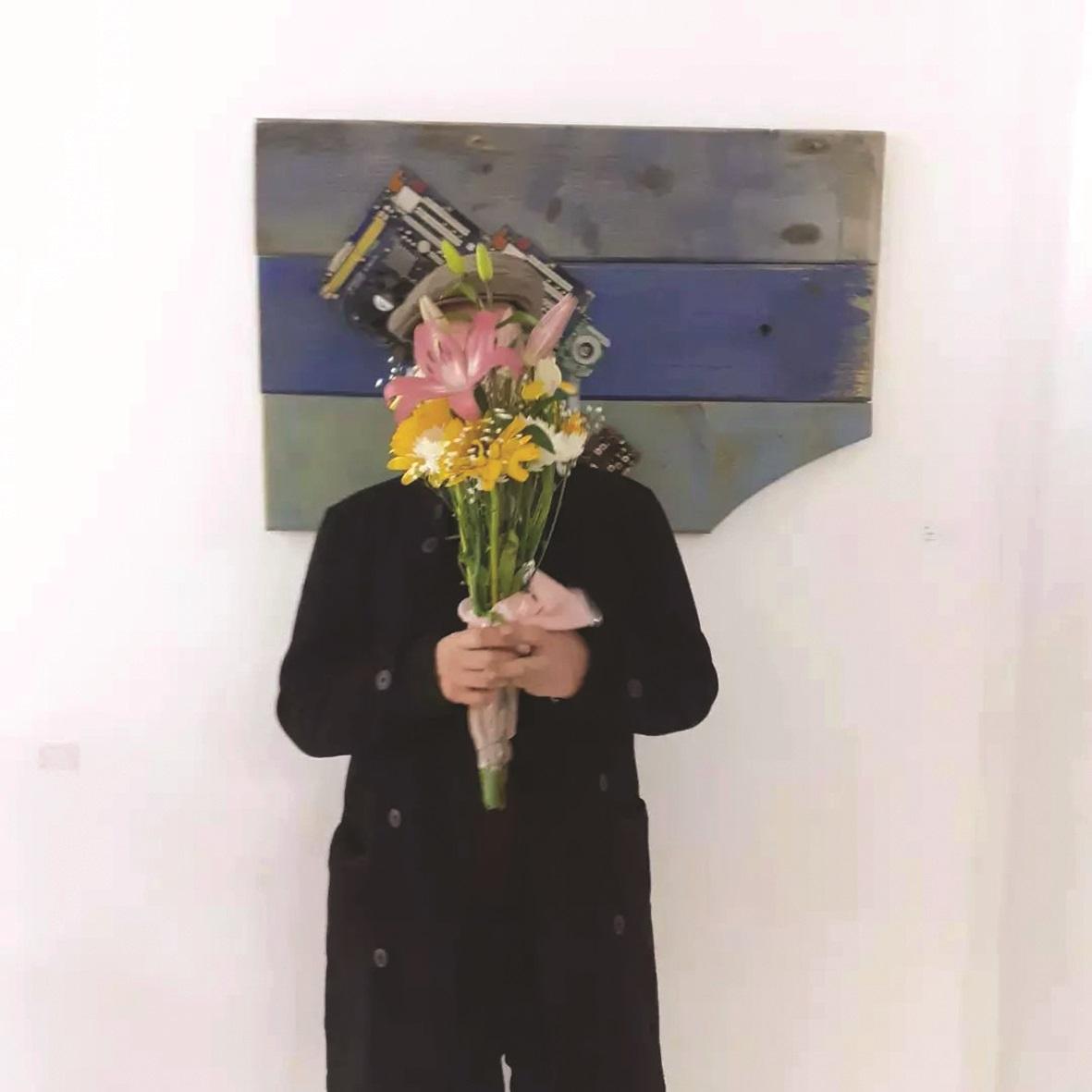 Normality has been replaced by a Sword of Damocles, precariously balanced on our collective heads. Indeed, the expression ‘hell on earth’ is gaining more relevance with every passing day. Besides this imminent danger of everything going disastrously haywire, we are bombarded with electronic messages, mobile phone calls, social media claims, fake news and other pollutants.

In a Maltese context, pandemonju refers generally more to the sense of hearing. Actual noise seems to be part and parcel of our Mediterranean way of life – petards, hunters shooting away, cars honking, people shouting indecorously, cars careening boisterously with music blaring away. Chaos has replaced the elegiac quality of a once peaceful island.

Key, originally from the busy southwest English city of Bristol, moved to Gozo, the so-called ‘island where time stood still’, in search of a sanctuary that would promote a cultural change. He was after a home that would ideally calm him via a laid-back way of life, one that would be conducive to new challenges in his artistic expression. 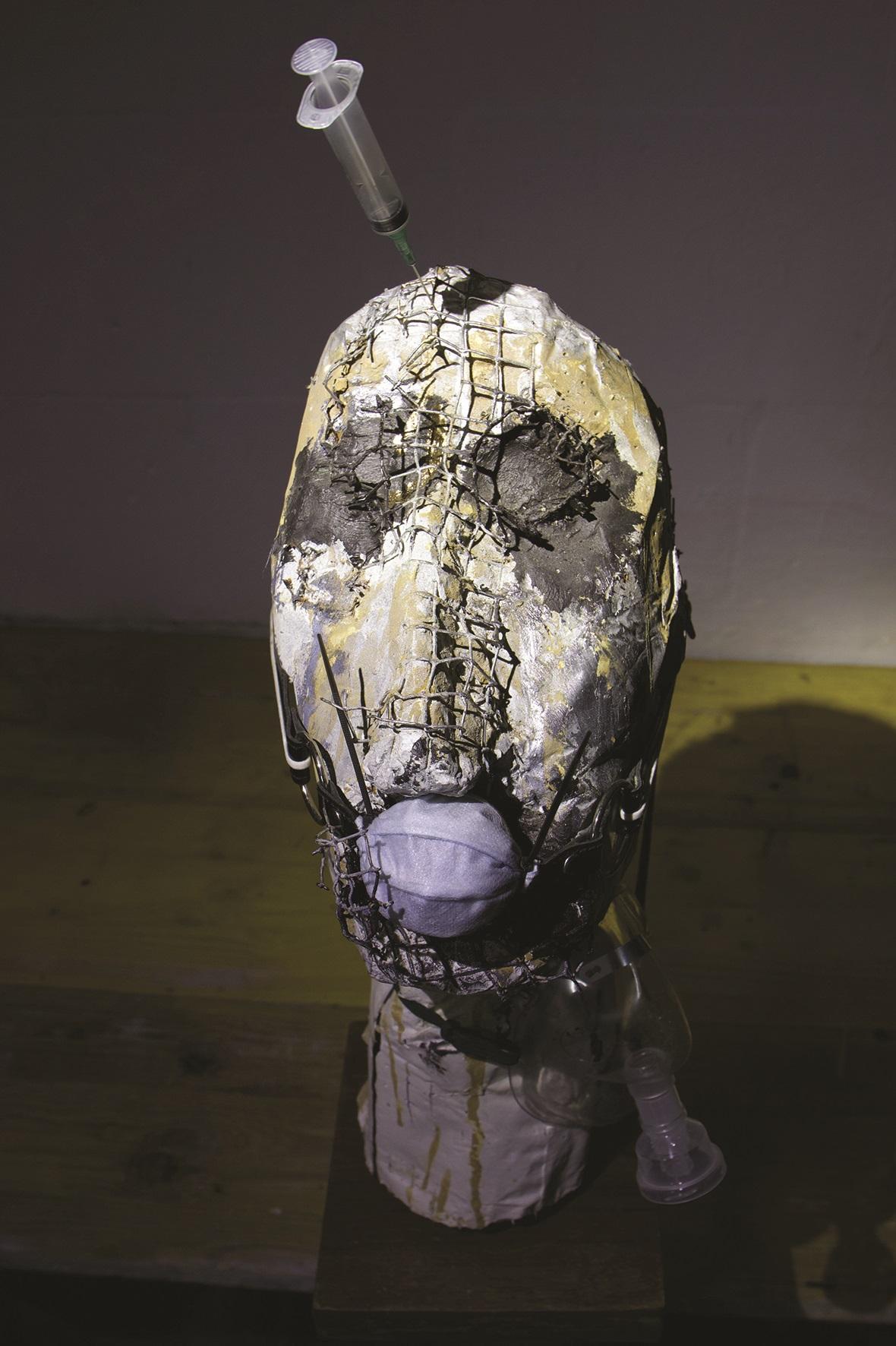 The sister island still enjoys a measure of serenity, although the haphazard and callous destruction of its countryside and villages is spreading like wildfire, compromising its myths and legends, and relentlessly depriving it of its magic.

Subscribing to an idealist, romantic notion of what the artist should represent, Key claims that “I have traditionally been and indeed still am reluctant to monetise my work due to the fear of compromising my artistic integrity”. Such a statement relieves the artist from any art market constraints, thus providing him with an artistic licence that does away with market forces and fads. 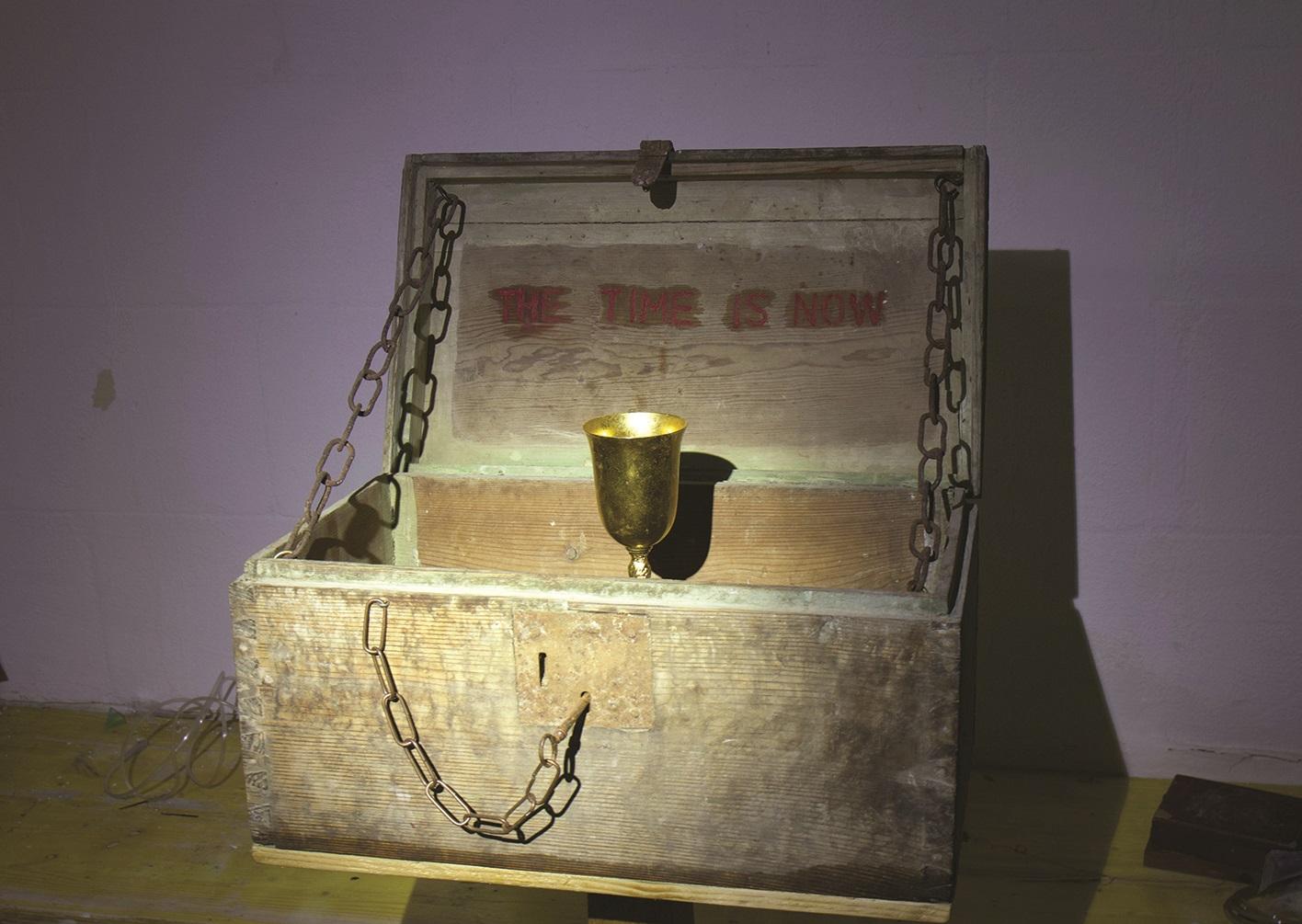 His concepts are expressed in assemblages of everyday mundane objects. These compositions subliminally erase the original function of the scavenged objects, in the meantime integrating them to communicate new narratives as finished artworks.

These compositions subliminally erase the original function of the scavenged objects, in the meantime integrating them to communicate new narratives as finished artworks

Assemblages can be regarded as collages in three dimensions, introduced and developed by Pablo Picasso and Marcel Duchamp in the first decades of the 20th century. However, German Dada artist Kurt Schwitters (1887-1948) is generally considered as the pioneer of the technique, and he coined a term for it, Merzbilder. 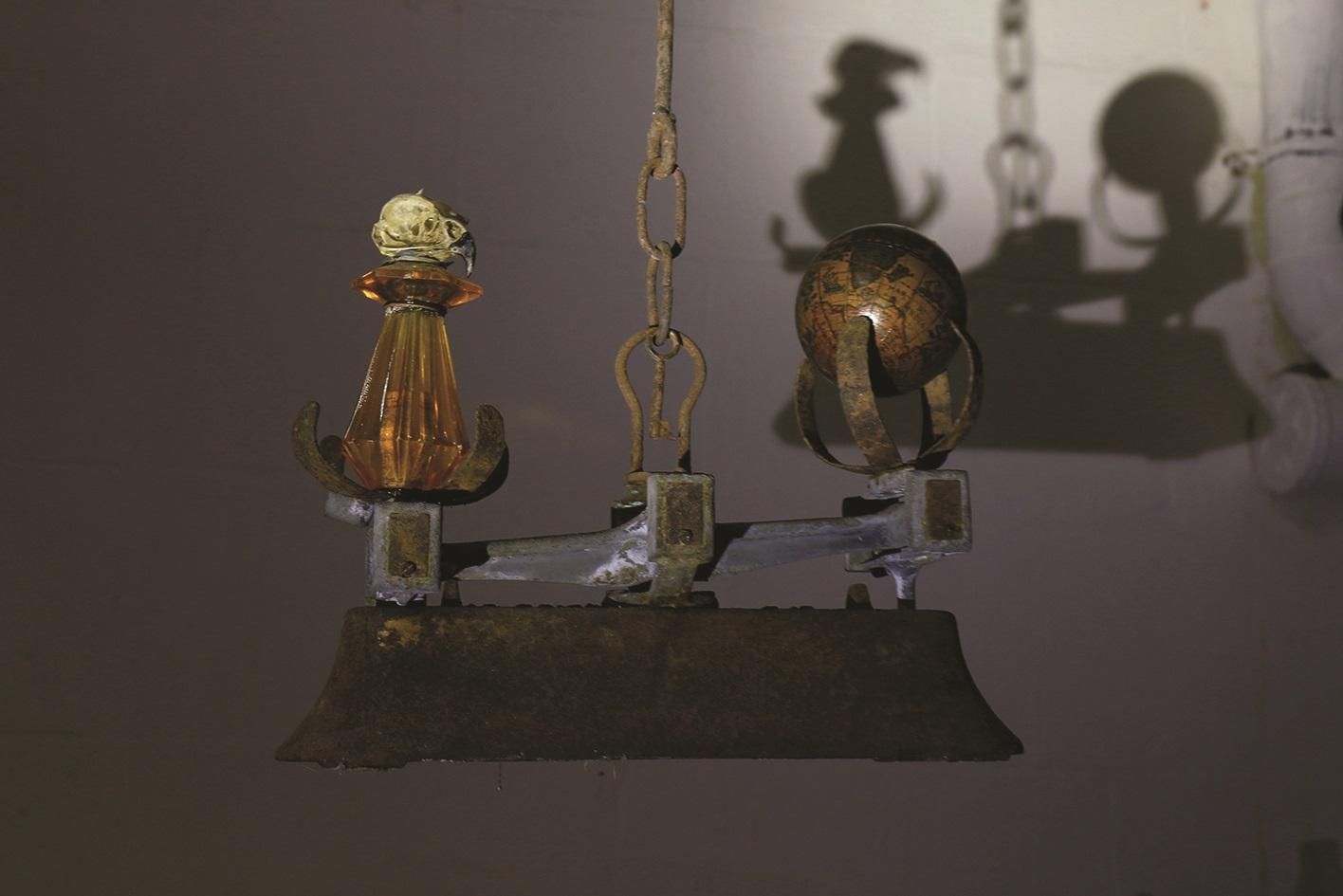 In Schwitters’s words: “The word Merz denotes essentially the combination, for artistic purposes, of all conceivable materials, and, technically, the principle of the equal distribution of the individual materials.” Key’s works follow this way of artistic creation by poetically reassembling non-related found elements, somewhat releasing them from their original purpose, and delivering a contemporary message.

Artist from diverse decades such as Man Ray, Joseph Cornell, Robert Rauschenberg, and the artists of the Italian Arte Povera movement, exploited the assemblage technique. Contemporary artists like Tracey Emin and Sarah Lucas have enriched the assemblage language while integrating photographs and more modern materials like synthetic polymers into their compositions.

Key’s Doomsday Clock, an assemblage of three found elements – an alarm clock, a trabokk (a small cage whose normal purpose is to cruelly imprison a small finch to lure others into the nets of trappers), and a water-plug and chain, are brought together as an artistic statement. Independently, their function is very straightforward to decipher. In their integration, the language changes to a much more ominous one ‒ living on borrowed time. The mangled-up cage holds no bird, a rusted banged-up clock is its captive.

The title refers to the chronological symbol of the Doomsday Clock, a metaphor representing the likelihood of a man-made global catastrophe. The artwork is a powerful portent indicating that our time is almost up and that we need to be awakened to the threats of ecological disaster, menacing nuclear holocaust and draining of resources, among others. 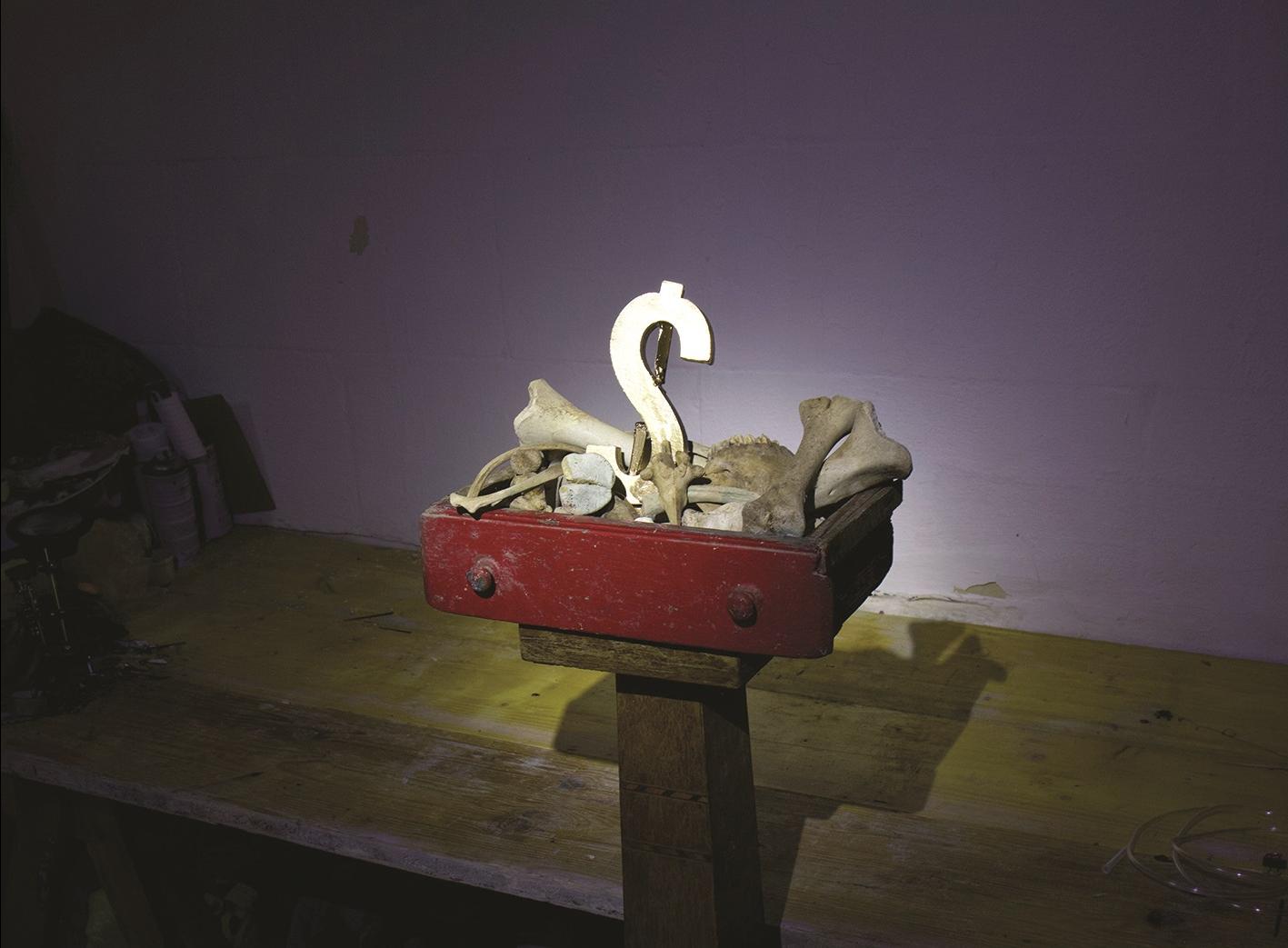 Fool’s Gold, the urban term for the mineral pyrite (and also perhaps a reference to Manchester music band The Stone Roses’ 1990s hit), often mistaken as gold itself, is the title of another sinister piece incorporating bones and the ubiquitous dollar sign, all contained in a drawer which the artist has decontexualised from its function of storage for clothes or other domestic items.

The quest to get rich financially and living beyond one’s means is a scourge that has been afflicting humanity from time immemorial. This is pursued sometimes at all costs, even at the loss of life and limb. People pursue the chimeric gold – the bottom line is that we are foolish to pursue something that glitters like gold but is not the real thing. 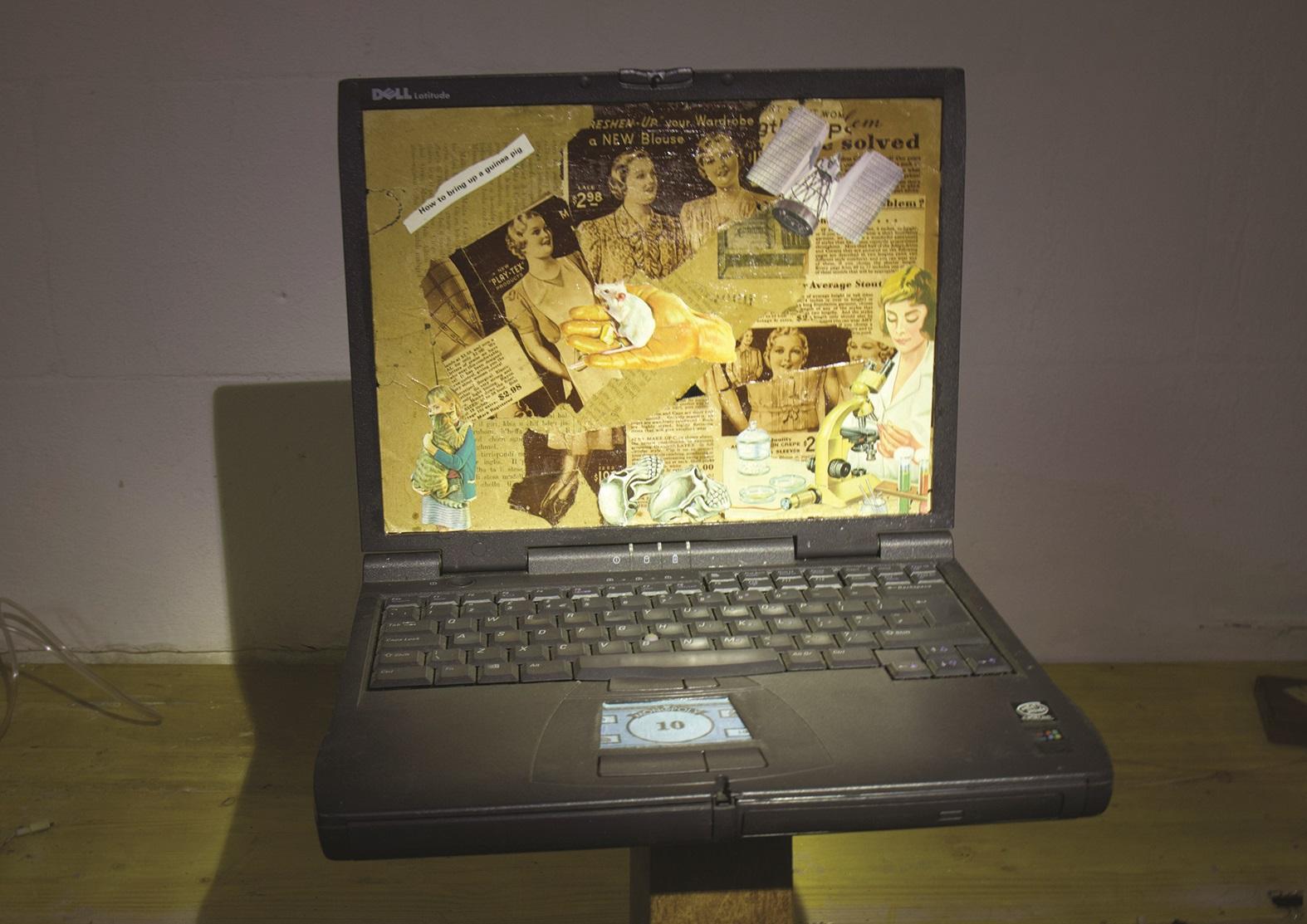 Monopolised is a very disconcerting assemblage in which the screen of a laptop is the template for a collage of yellowed newspaper and magazine cuttings from publications belonging to the 20th century. Social media’s gossiping power has replaced the function of publications as purveyors of trivia. The electronic revolution has altered our existence, but the thrill of eavesdropping and voyeurism has persevered as a human trait.

Key intelligently introduces the technique of collage as a factor of assemblage, which could be his comment on the historic origins of the technique itself. Meanwhile, the fake £10 note, the currency of the board game Monopoly, covers the touch pad of the device. One could decipher this as fakeness monopolising everything. The eloquence of the piece is multilayered and open to interpretation. 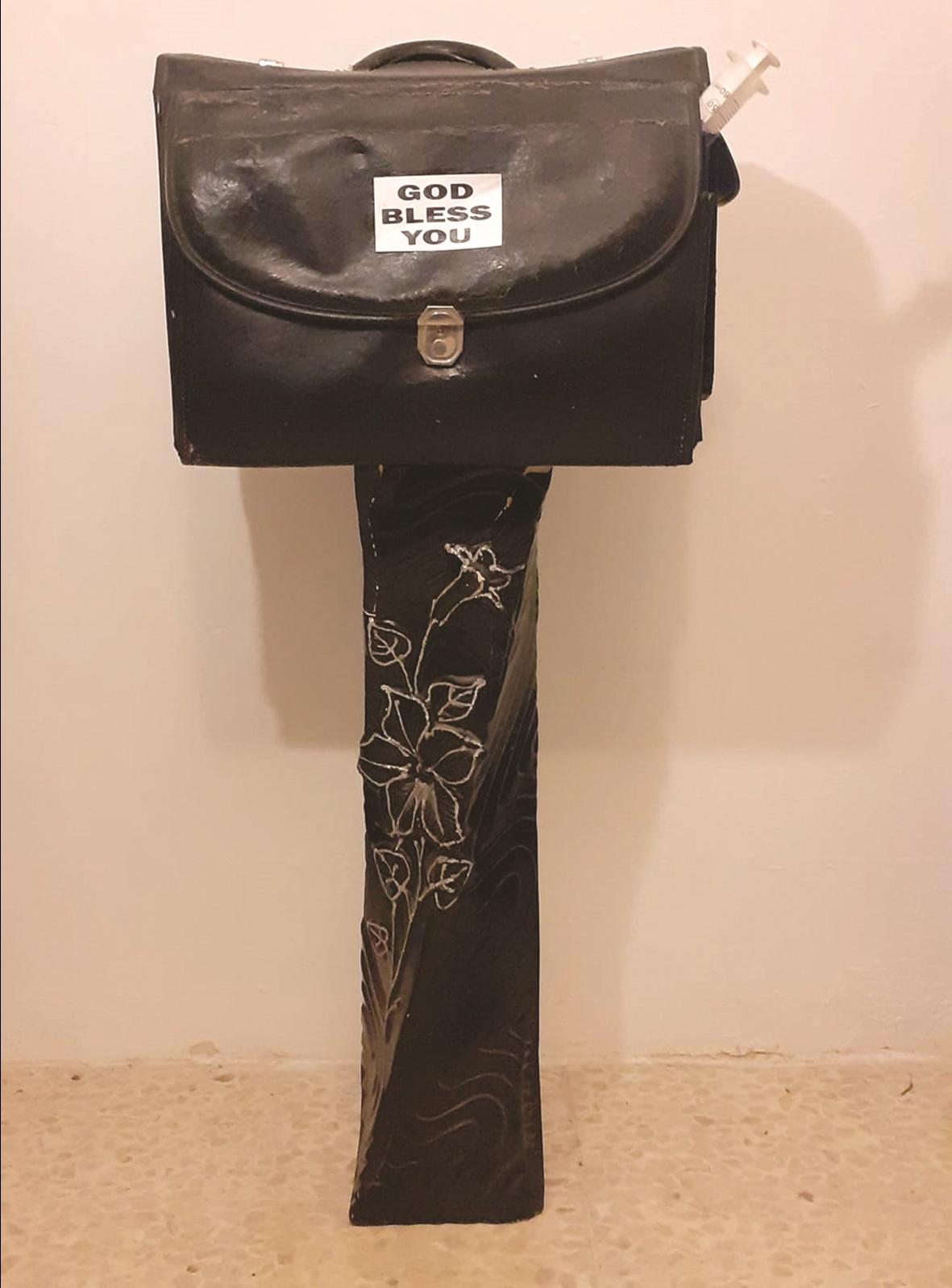 This collection of works explores contemporary themes by juxtaposing and recontextualising objects that Key has coalesced together very poetically. Poetry, especially in the times we are living, is bound to be honestly brutal too.

Pandemonium, hosted by Arthall in Victoria, Gozo, is open until April 3. Visit the event’s Facebook page for opening hours.