Exhibition explores the ‘mud, blood and dreams’ that make a human being

“It is a narrow mind which cannot look at a subject from various points of view.” − George Eliot

An exhibition with the title of Perspectives II relates to open-mindedness, to objectivity and to narratives which are fluid. This is Tomas Hed’s second solo exhibition, hosted again by Arthall in Victoria and bearing the same name. Hed hails from Sweden but has made Gozo his home. 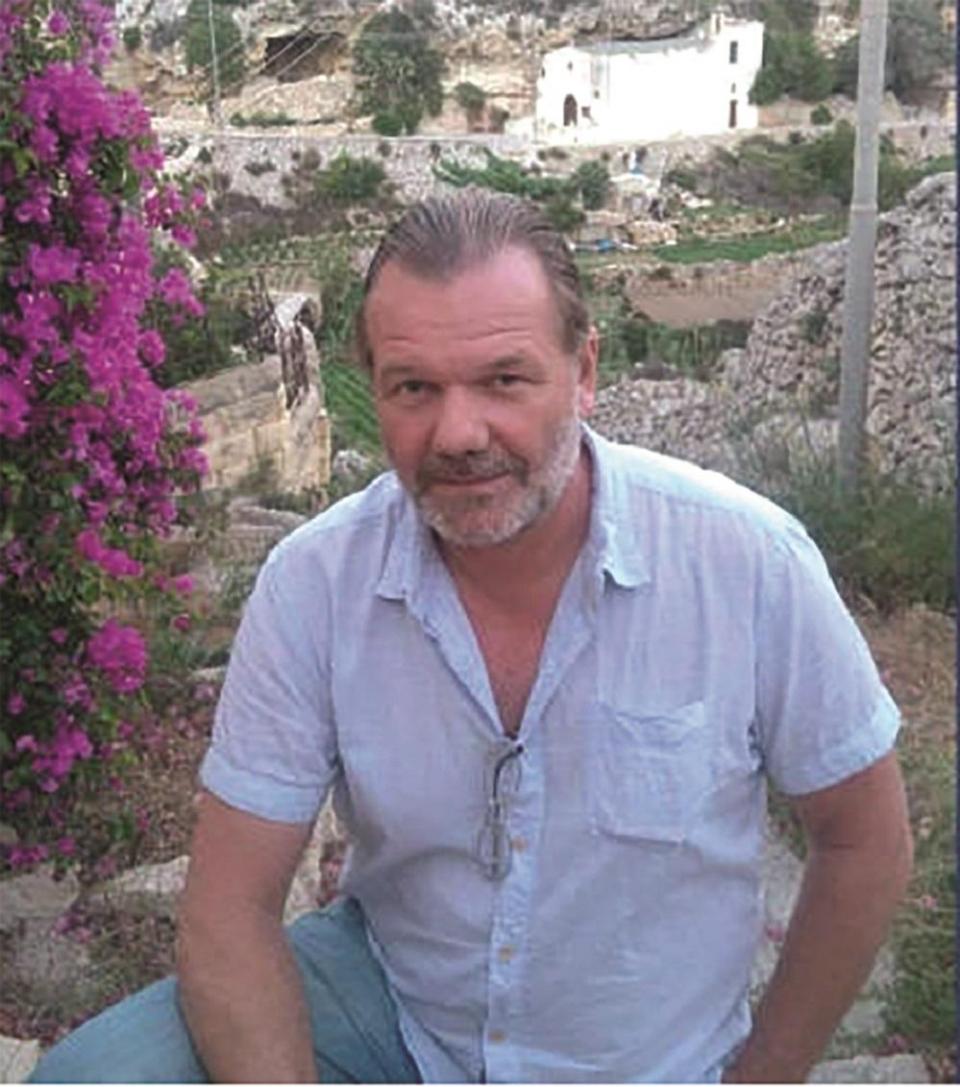 The versatility of themes and painterly techniques relate to the ethos of the exhibition that investigates different aspects of the human condition. In the words of the event’s mission statement, the artist focuses on what constitutes a human being, that is “mud, blood and dreams”.

We are essentially of the earth, with passion cruising through our veins and with aspirations, desires and ambitions firing our thought processes.

Each of these paintings can be regarded as an opinion, a viewpoint. In their totality, the viewer can glimpse anthropological, philosophical and sociological facets that redeem and torture human existence. 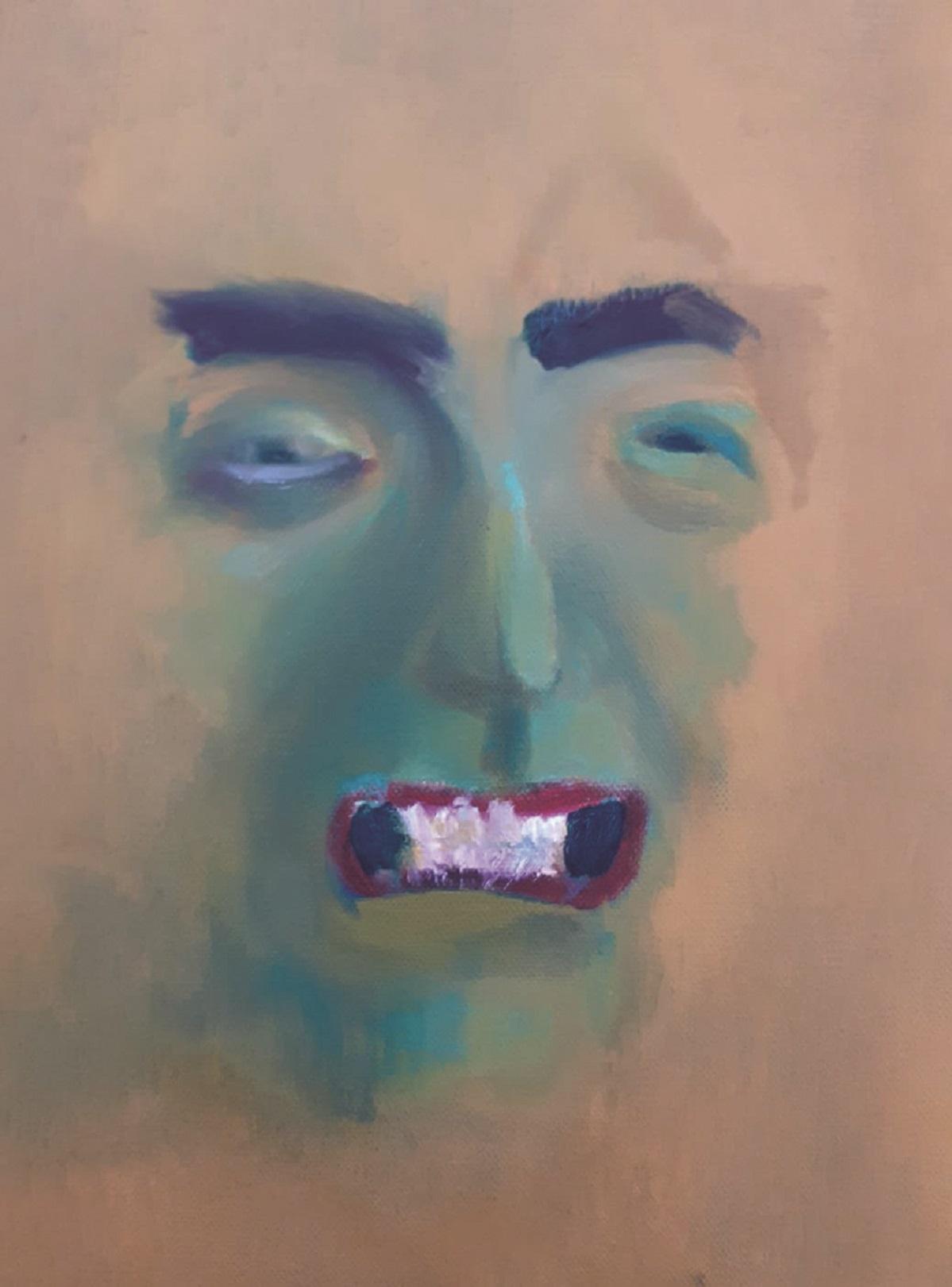 In his powerful painting, Corrupt 1, Hed latches on contemporary reality, plagued by this pestilence that has no remedy. Corruption has permeated all layers of society; one feels powerless to combat such an unassailable multi-tentacled monster. Clenching our teeth, we helplessly scream at the incongruity and unspeakable injustice of it all. Nevertheless, nothing will change and we have to learn to accept it as our plight. Reminiscent of Italian artist’s Francesco Clemente’s 1983 painting Name, Corrupt 1’s head, dispossessed of its body, floats like a ghostly mask of existential pain and primitive anger.

“These paintings are observations on the contrasts and idiosyncrasies of everyday life, repulsive or endearing as they might happen to be”

At face value and named When Kerstin Had Appendicitis and Was Put Away in the Attic, one mistakenly assumes that the title honestly reveals the narrative. This ominous painting demonstrates the forlorn but loving relationship between three young siblings, the youngest one of whom is constrained to a cot, suffering from an ailment, euphemistically diagnosed as appendicitis. 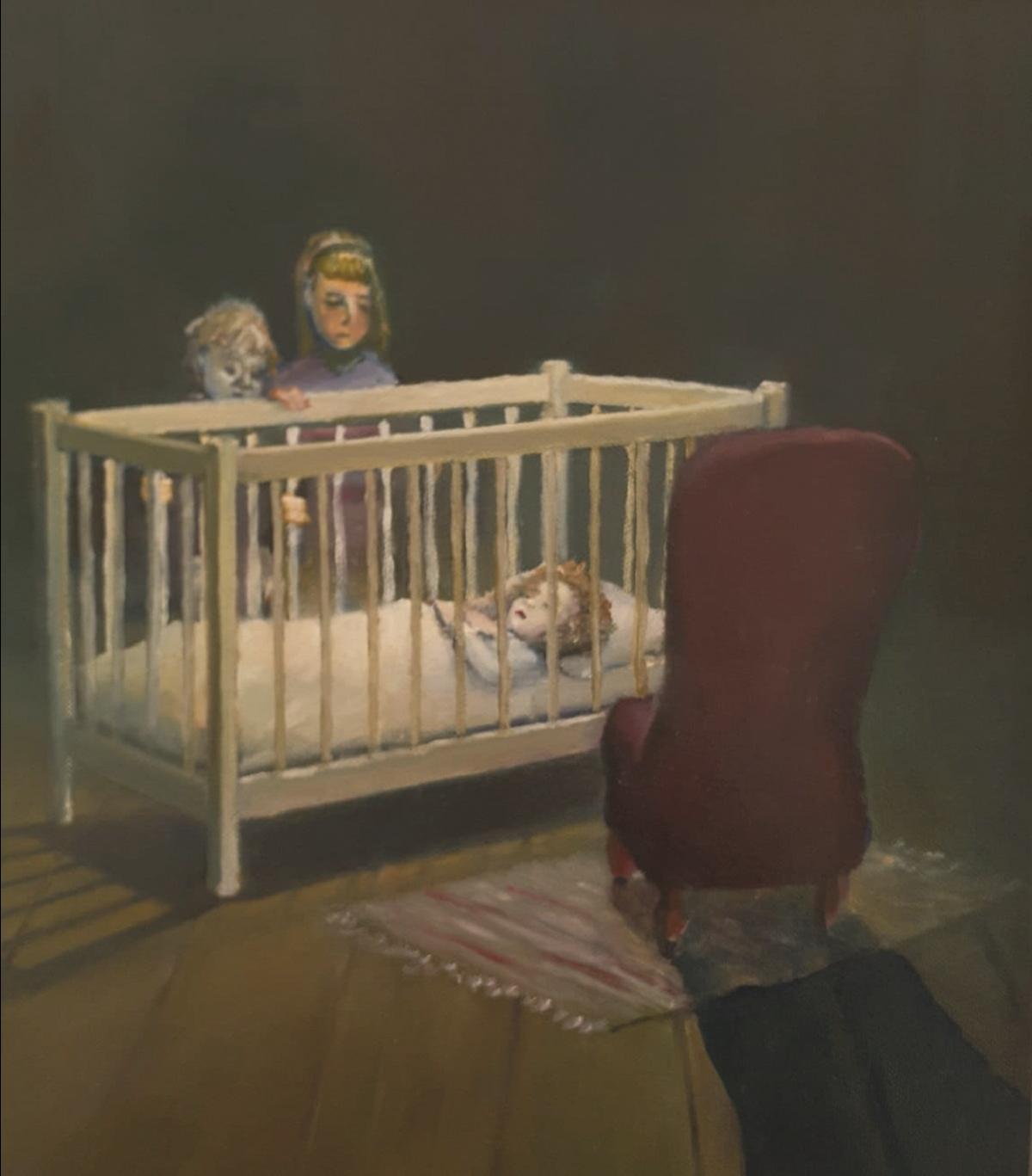 When Kerstin Had Appendicitis and Was Put Away in the Attic

The wood flooring and the ‘attic’ indicate that this confinement relates to a foreign country, maybe Sweden, Hed’s country of origin. However, one can transpose this narrative to a Maltese context and to the cellar down below or the dark room, with shielded windows, at the end of the upstairs corridor. In some cases, young children suffering from some congenital or mental disease were ostracised to a particular room to be out of public view and ‘derision’.

A euphemism had to be created to make the ailment more socially acceptable in a narrow-minded society. One would expect that a parent or an adult relative would be occupying the armchair, which sticks out like an accusing finger. This sorrowful but eloquent painting suggests that children at times are more empathetic than adults; they are more immune to labels of shame and denigration. 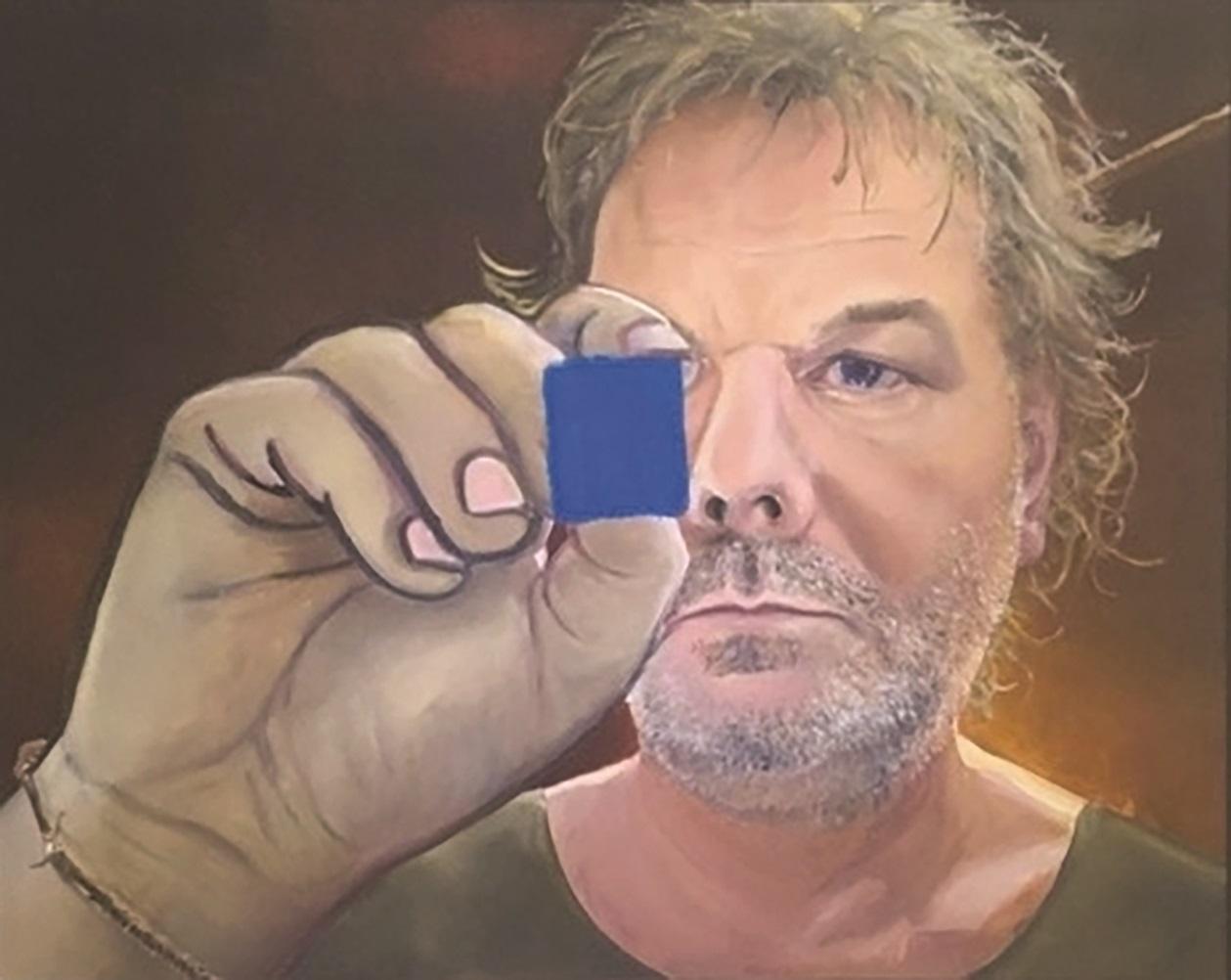 As the Canvas Sees Me

In As the Canvas Sees Me, Hed attempts an alternative and disconcerting take on the self-portraiture genre through the inversion of perspective. This disorientates the viewer, who is now surrealistically occupying the plane of the image thus created. The blue square maybe represents an out-of-focus paintbrush or the last portion of the self-portrait yet to be completed. The unorthodox composition can be read as the artist’s comment on distorted preconceptions. 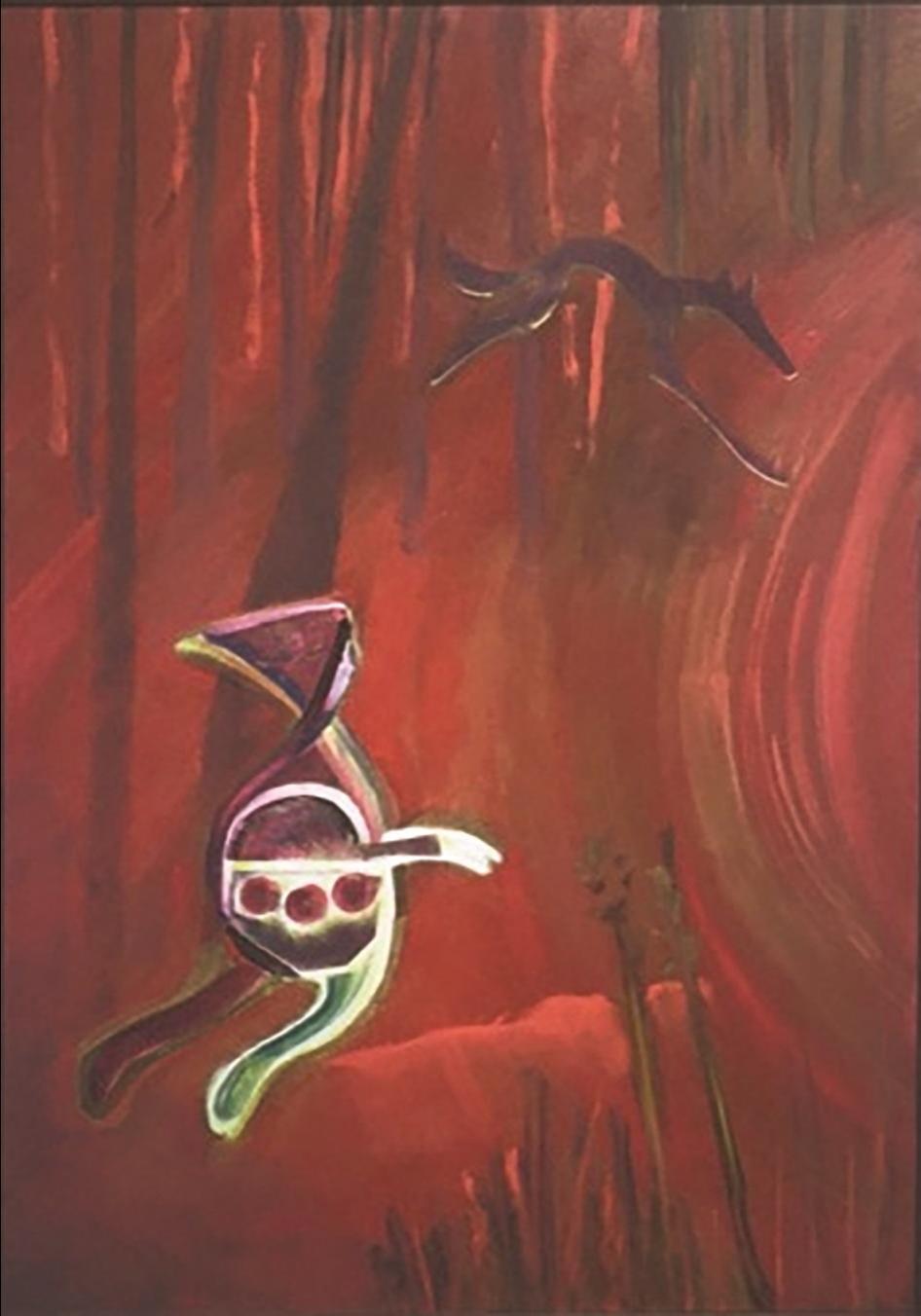 Red Riding Hood reverses the roles of the timeless Charles Perrault tale in which the innocent young girl, clad in red, finds the wolf in her grandma’s bed, ready to gobble her up. The stylised agile wolf in Hed’s painting seems to flee as if frightened by the young girl, full of chromatic fervour, carrying food to take to her grandma’s cottage. In this modern-day fairyland of Hed’s painting, the predator is much more in danger of being destroyed; the poor wolf acknowledges this as he tries to disguise himself in the crimson dusk and slink away to the safety in the depth of the forest ‘redness’.

The artist imbues the narrative in shades of red, the colour semiotically synonymous with the traditional tale, as depicted by famous illustrators like Arthur Rackham. Red Riding Hood’s coat stands out in these illustrations, amid the green or brown forest of the trees. An Edvard Munch red, swirling like blood, permeates all elements that are protagonists in Hed’s composition − trees, young lass and wolf − delivering an awry but more contemporary morale to the much-loved morality tale.

Hed uses the technique of collage for Two Kings, integrating cut-outs that work as silhouettes against the vibrant bellicose red backdrop, evoking the Japanese technique of Kamakiri. The two figures are rather reminiscent of the iconography of kings in playing cards decks, depicting mirror images of the same monarch of the particular suit. In Hed’s painting, the two kings are independent of each other and not joined at the hip.

Their forefingers meet, evoking Michelangelo’s Creation of Adam in Rome’s Sistine Chapel. However, there is a sense of admonishment and dictatorial menace in their statuses as rulers; even though close relatives, kings have waged wars against each other, resulting in bloodshed and turmoil.

One is thematically reminded of Mikalojus Čiurlionis’s The Tale of Kings, in which the Lithuanian artist portrayed a story from his country’s folk culture. The two monarchs in the Lithuanian artist’s painting elegiacally survey a rural landscape, the source of spiritual light that illuminates all and that gives them temporal power. Not all kings are bloodthirsty and warmongering. 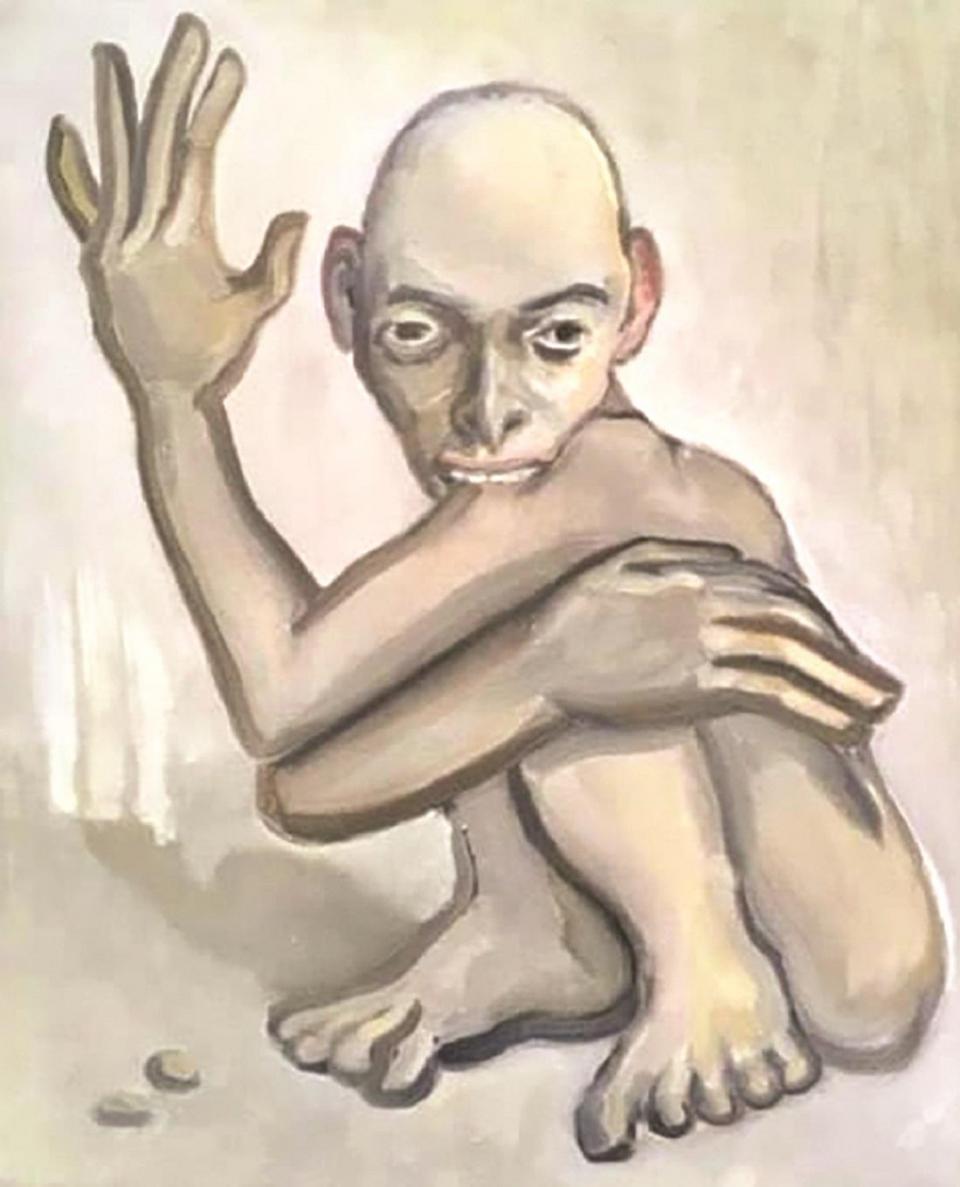 Organic Man is a disturbing painting in which a naked man is feeding on himself, in an act of autosarcophagy, evoking a similarly themed 16th-century grotesque painting by an unknown artist. The humanoid, bald and deformed character with prominent limbs resembles the Gollum Smeagol, the character in the Lord of the Rings trilogy of books, who hungers after the evil power of the One Ring. Hed’s painting could be a dystopian metaphor for the involution of humanity, steadily atrophying into a ravenous monster ready to devour itself.

Quoting from the exhibition’s mission statement: “He [Hed] will present a series of paintings that are reflections of our limitations and, at the same time, of our will to overreach them, consciously or unconsciously.”

A few of the paintings were executed more than 20 years ago in Stockholm, much before the artist decided to move to Gozo, while others are more recent creations. These paintings are observations on the contrasts and idiosyncrasies of everyday life, repulsive or endearing as they might happen to be.

Perspectives II, hosted by Arthall of 8, Triq Agius de Soldanis, Victoria, is on between April 8 and May 8. Consult the gallery’s Facebook page for opening hours.