Art is taken very seriously in Vietnam. This can be attributed to Vietnam’s ancient traditions, the infusion of the French love for art, and the artistic inclination of the Vietnamese people. Hanoi’s Academy of Fine Arts was founded in 1925 as “École Supérieure des Beaux Arts de l’Indochine” when Vietnam was a colony of France.

During the war and after the unification in 1976, artists mainly produced works of socialist realism, painting revolutionary heroes, propaganda posters or idyllic scenes of life under communism. This changed after the Government introduced its “Doi Moi” economic reform policy in 1986 with the goal of creating a “socialist-oriented market economy”.

The owners, Bee Bonniger and Hans Friederich, lived in the capital of Vietnam from 1994 to 1999.  When they were there, young artists were relishing the new freedoms, experimenting with new styles and forms of expression, and an international market for the work of Vietnamese artists was emerging.  There were new art galleries in the centre of Hanoi with an ever-changing selection of local paintings. There were occasional art exhibitions, and often the artist would be there to introduce his or her works, although not many spoke English.  And they got to know a good number of painters and designers who would invite them over to their studios.

Although clearly influenced by outside styles, Vietnamese painters continue to use national imageries. They often use traditional themes that they translate visually in a modern way. Even on semi-abstract, semi-figurative paintings you can still see traditional allusions – the boy on the water buffalo, for example, or the girl in the Ao Dai, Vietnam’s national dress. But these contents are no longer painted in a traditional, but rather in a modern way. You see this in many of the paintings exhibited in Arthall.  They are all originals acquired during their stay in Hanoi. 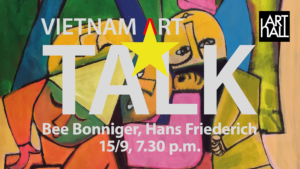