Exhibition: Shared perspectives from ‘64A, Flat 1’ on a street in Xagħra, Gozo

The title of the exhibition 64A, Flat 1, is the address of a residence and a shared studio in Xagħra, Gozo. “We were confined only in the sense that, because of the pandemic, we found ourselves and our minds concentrated on Gozo. We lived an unconfined life in the smallness of Gozo. Even within the pandemic restrictions, our experiences were fuller,” artists Lydia Cecil and Seb Tanti Burlò declare.

Burlò’s comments on the irony of it all

Burlò’s art brings to the fore the ironies in Maltese society. Rural Gozitan beauty is depicted as being tarnished by contaminants; his is a narrative regarding natural beauty succumbing to the devastation brought on by des­tructive policies; Burlò asks whether it is indeed possible for two contrasting realities, one of natural beauty and one of its impending destruction, to co-exist. Maybe we have arrived at a stage that satirical art reflects a fait accompli and just documents the hopelessness of it all, without any hope of engaging with general society, too blind and stupid to see the destruction going on around it. One can perhaps draw parallels between Burlò’s caricatural work and German artist George Grosz’s denunciation of decadent life in 1920s Berlin and the shortcomings of the Weimar Republic. 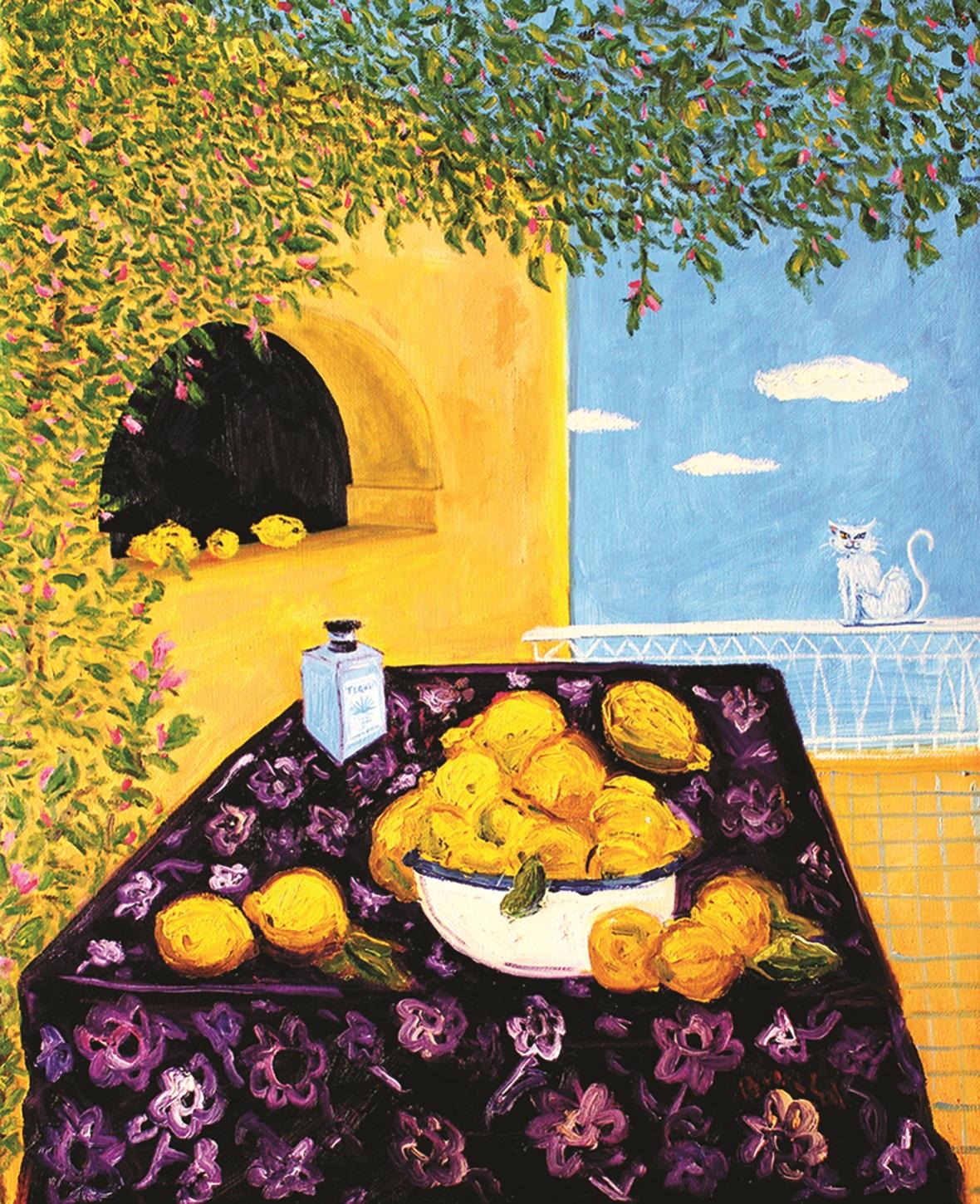 “My works caricature current realities, yet the more I do it, the more I feel that my exaggerated depictions may not be far off from the reality we are living,” the artist remarks.

He continues: “The comparison to George Grosz makes me blush. His work as well as his contemporary Otto Dix are some of the artists who have punched me in the back of the head, forcing me to look at and comment on aspects of society that are generally overlooked in the arts.”

Grosz and Dix investigated the rot at the basis of German society of the 1920s. These two major artists, together with Max Beckmann and Christian Schad, were the main protagonists of Neue Sachlichkeit, the ‘New Objectivity’ movement whose paintings were a savage satire on the German reality and on the human condition in the aftermath of World War I and on the weak and ineffectual Weimar Republic.

“We may not be living during a world war with all its devastation and inhumanity, but we are currently living another war, with similar tones of vulgarity and destruction; natural beauty decimated by our wanton greed,” claims Burlò.

“The climate of corruption that has captured the state of Malta. The assassination of journalist Daphne Caruana Galizia and others throughout Europe and the world; the international and intentional decay of democracy; and the over-arching climate crisis. We are very much living through a war. The reality we have constructed for ourselves is wondrous in its achievements but mortifying in its failings,” he ruefully observes. 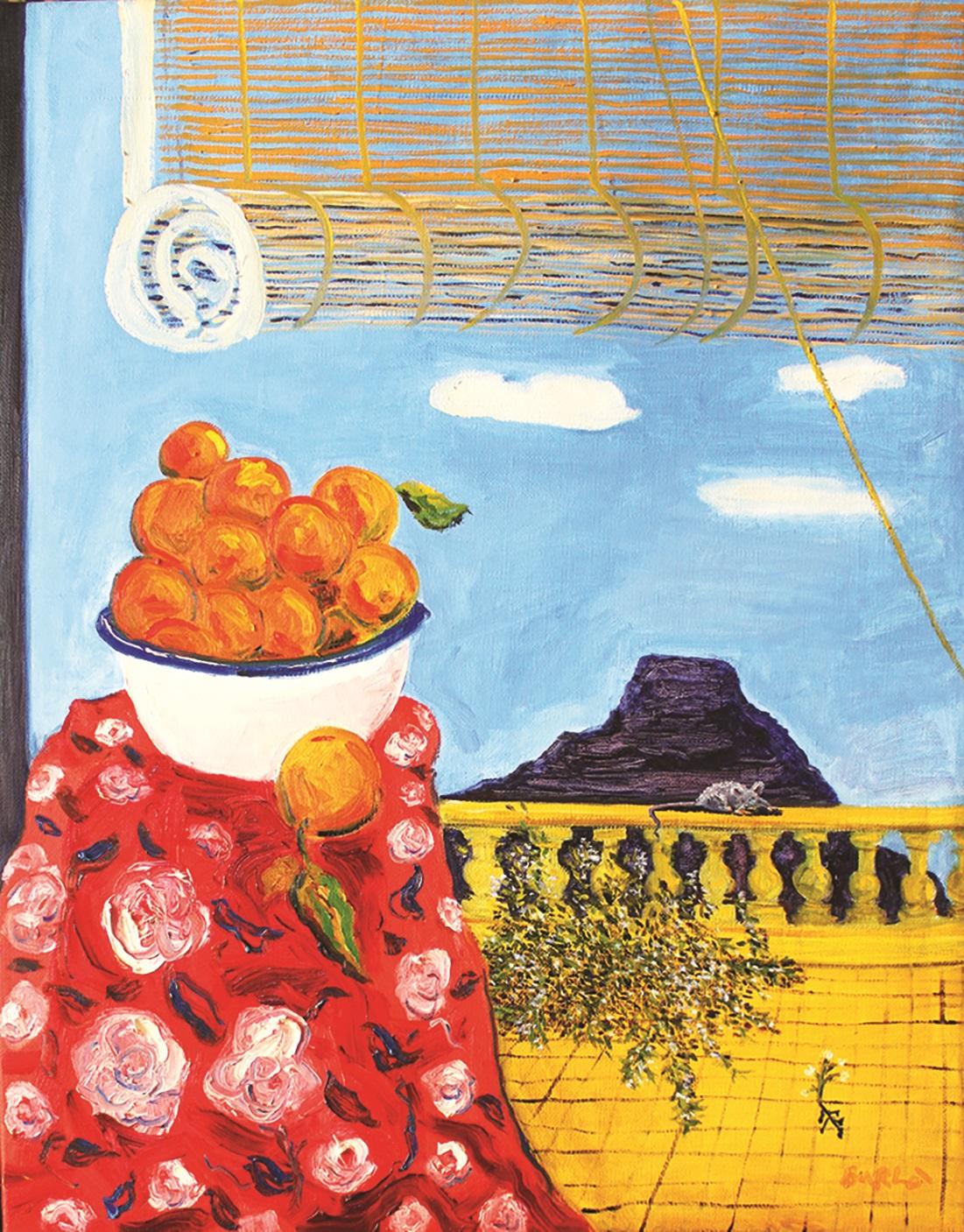 However, paintings like Larinġ ta’ San Blas u Beatrice and Lumi ta’ Leon u Cabbage seem to suggest that one can still find pockets of a past, dreamy Gozo, and its rural innocence and genuineness with­in the domestic comfort.

“There are many pockets of beauty still left to enjoy and to live within. Yet they are rarer to come by, as they succumb to our notions of ‘development’ and ‘progress’.

“These two paintings are both nostalgic depictions of idealised memories of things past, and truthful renderings of the present. The fruit in these two still life paintings are the produce of Gozitan farmers who for generations lovingly tended and nurtured their land,” the Maltese artist affirms.

“Cabbage was our semi-adopted stray cat, so named because she was white like the cabbage white butterflies we saw on our terrace,” remarks Lydia Cecil, Burlò’s partner and co-exhibitor.

We were confined only in the sense that, because of the pandemic, we found ourselves and our minds concentrated on Gozo

Burlò’s work as a newspaper cartoonist is more minimal and monochromatic, maybe chromatically mirroring the local political and social situations. They are more like parts of comic strips, including both picture and text, thus defining the context and passing on a direct and unequivocal message. 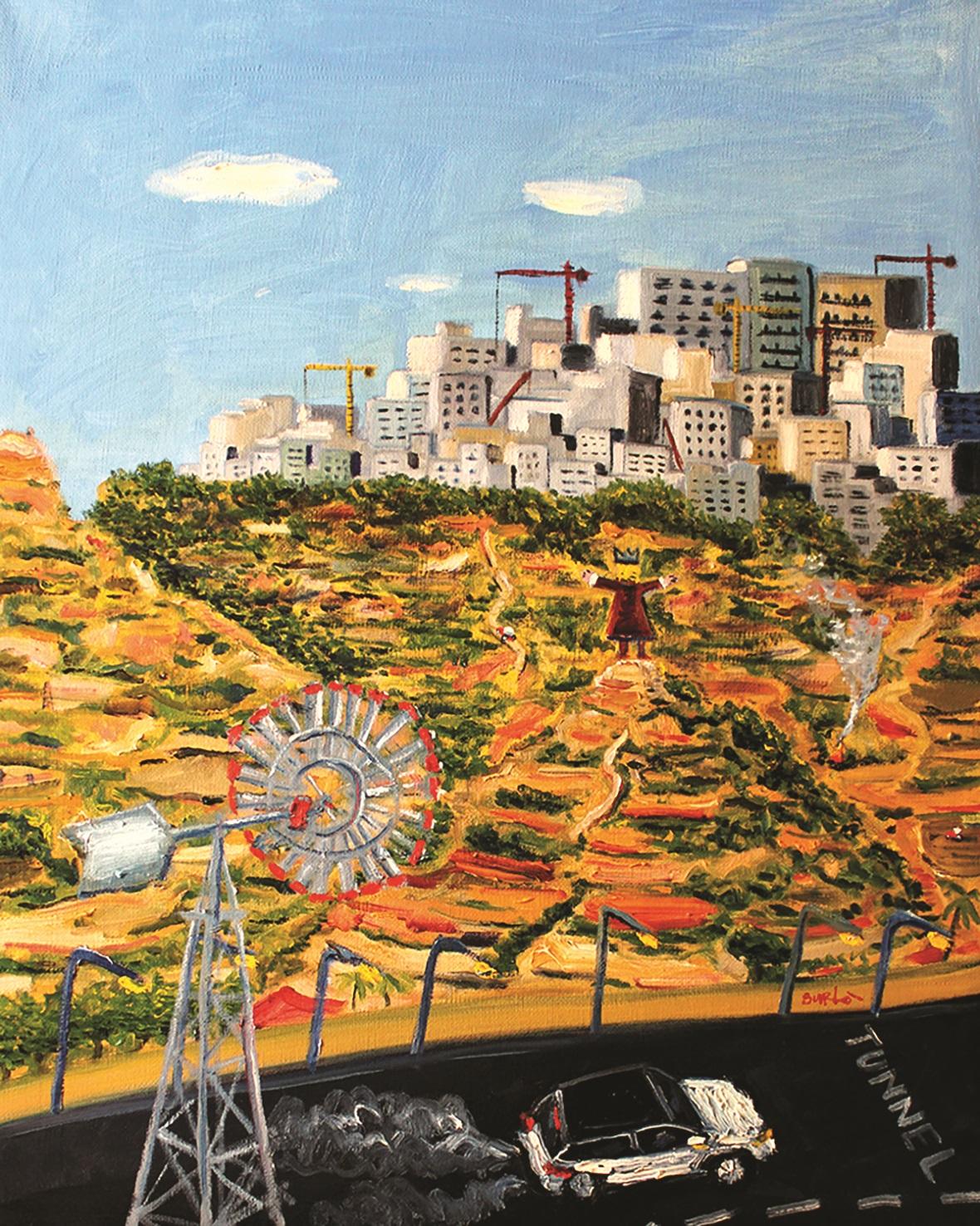 “Neither mediums seem to be effective in their deliverance, since the message does not seem to be getting through. It could be that the audience is indifferent to what I am trying to say, or maybe it is I who has gotten it terribly wrong. Still, I keep on trying,” concludes Burlò.

Lydia Cecil and portraits of vulnerability

British art is blessed with artists who took the portraiture genre to new heights. One can mention William Coldstream, Gwen John, Lucien Freud and Celia Paul as major protagonists who went beyond physiognomic perfection. They dug deep to arrive at the soul of their sitters. Art critic Rosemary Waugh declares that Celia Paul “channels her unique relationship with the people and places into reflective and acutely intimate images”, a quality which one similarly encounters in the portraiture of Gwen John and Lydia Cecil herself – a feminine sensitivity towards portraiture. 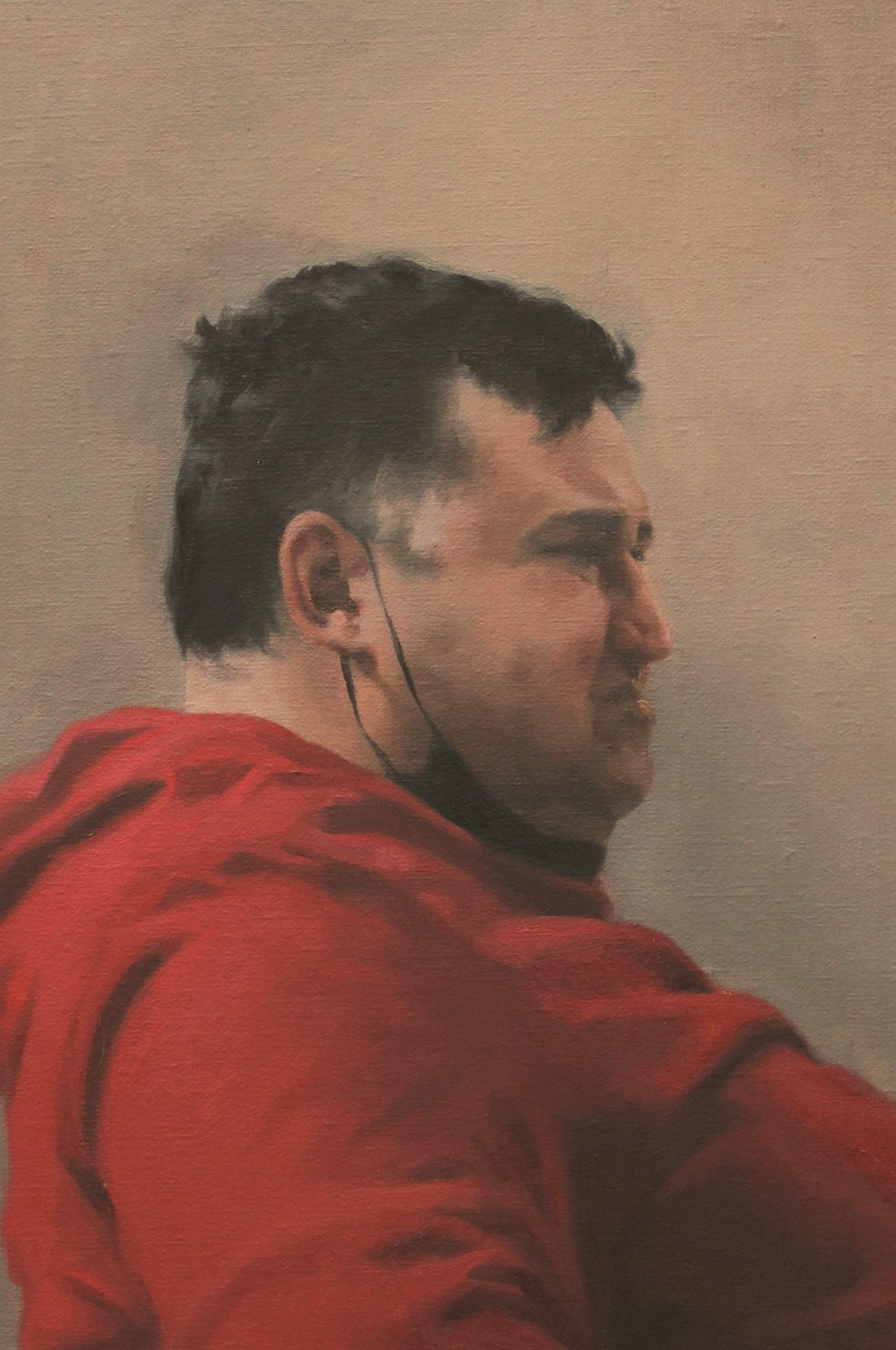 Some of Cecil’s are paintings of internal peace, intimate biographies of people lost in their own universe while in other examples, the artist brings out extrovert characteristics. One wonders if Cecil’s collection of paintings is an exercise in dualities of human psyche, introvert versus extrovert. The artist removes a context that would have been determined had she documented their surroundings; some of her subjects wear masks, rooting them to the time of the pandemic.

“I believe the introvert vs extrovert duality is a little limiting and will usually depend on the setting. I tend to look for the level of sensitivity in someone. In other words, their awareness of self, sympathy or subtlety. The more overtly confident still have delicacy and the reserved, an inner resolution,” she points out. “And all have differing levels of internal reflection. I like your expression of internal peace and intimate biographies – I like to think it fits with the candour and honesty I was aiming for,” Cecil remarks.

“But I hope also without always being too solemn – for some the frankness of their pose or expression belies seriousness. As you say, this examination is ideally unrelated to any definite setting in order to focus in on the self. However, some of this was influenced by the ever-present vulnerability surrounding the pandemic, so it felt unignorable even if it meant rooting a few in a specific time,” the artist adds. 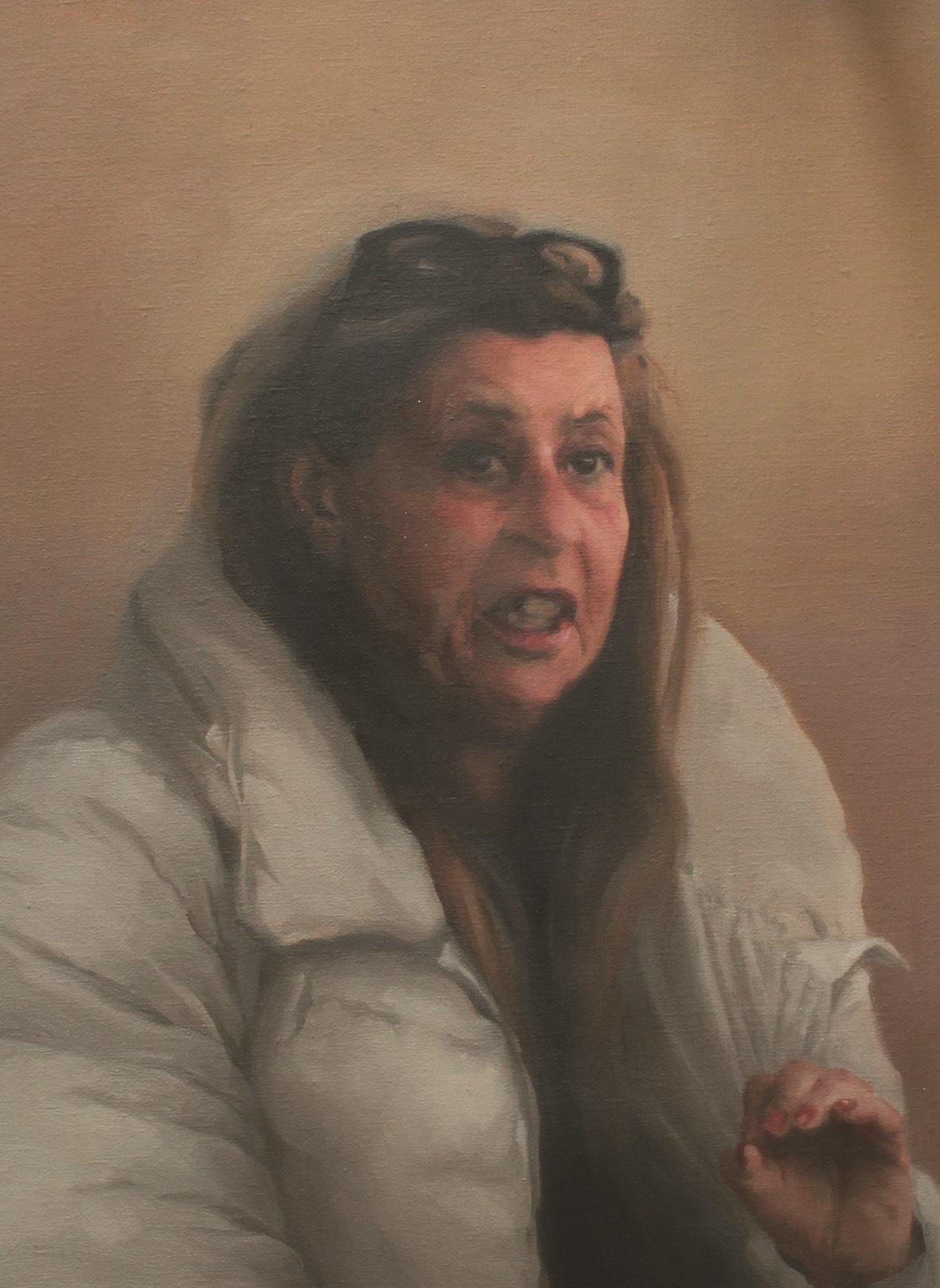 ‘Making a Point’ by Lydia Cecil

Oscar Wilde claimed that “the sitter is merely the accident, the occasion. It is not he who is revealed by the painter; it is rather the painter who, on the coloured canvas, reveals himself”. One asks how much of the artist is revealed, if any, or if it is dependent on the particular portraitist.

“When I was a teenager, The Picture of Dorian Gray was one of my favourite books – no doubt it still is. Wilde also says in it: ‘It is the spectator, not life, that art really mirrors’,” says the British artist. “I have revealed an aspect of the sitter’s personality as I saw it. However, I observed them for a comparatively short amount of time, and I did not meet them (with the one exception of Ed). Pandemic restrictions meant that I couldn’t get to know them as I usually do through long life sittings.

“In turning to the camera instead, I took the opportunity to be the unseen observer. Therefore, I hope in these portraits the spectator can relate to and identify themselves in these Gozitans, perhaps in a way that would have been impossible had I known the sitters well. It is themselves that is mirrored as much as the sitter. I’m sure there’s someone who could read into them what it says about me, but that person isn’t me,” she continues. 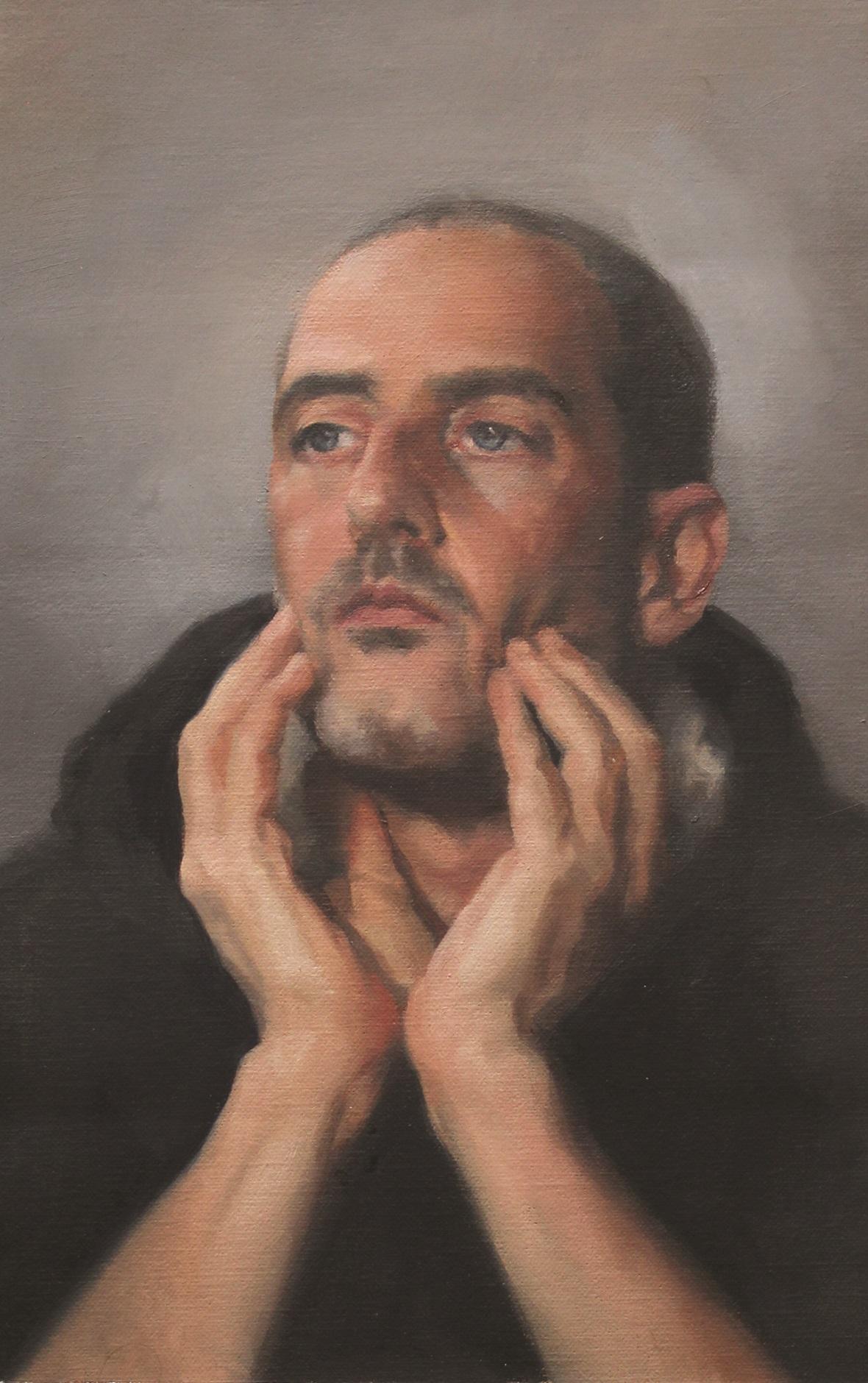 Being portraits of Gozitans, of people actually belonging to the island, Cecil tells a story within a story. The lives of these people need to be saved as Gozo is about them too, and their qua­lity of life. The island where time stood still is also about them. Cecil sensitively uses a restrained palette, thus awarding the people portrayed with an almost sacred dignity. There is more than the countryside, the vernacular buildings and the quaint villages to be lost in this unbridled destruction of Gozo. Maybe the essential Gozitan would be a liability too.

“I think it a story that is being played out across the world. In losing the health of the world, we are losing respect and awareness of ourselves. As an outsider to Gozo, I see a lot of this quiet dignity that has all but vanished in my own country, and slowly is being lost here as well. I hope there are qualities here we can recognise in ourselves, from old and young generations alike, to reclaim and preserve. We can emulate the stoicism and decorum of elders for instance, while embracing the multiculturalism being championed by the youth. All the while taking elements of sustainability, self-respect, and humour from each,” Cecil concludes.

64A, Flat 1, curated by Marta Obiols Fornell and hosted by Art­hall of 8, Agius De Soldanis Street, Victoria, Gozo, is on until October 31. COVID-19 restrictions apply.